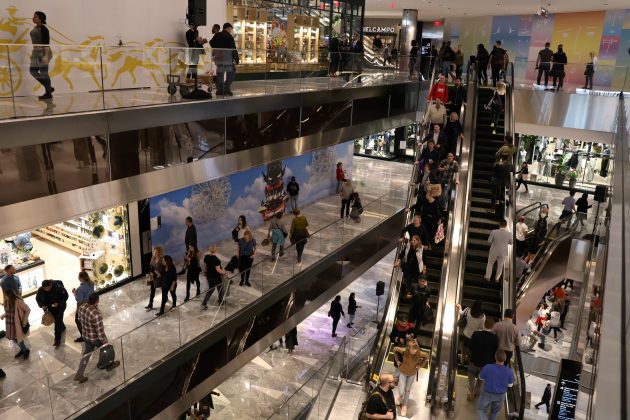 People tour The Shops during the grand opening of The Hudson Yards development, a residential, commercial, and retail space on Manhattan's West side in New York City, New York, U.S., March 15, 2019. REUTERS/Brendan McDermid

WASHINGTON (Reuters) – U.S. consumer prices barely rose in May, pointing to moderate inflation that together with a slowing economy increased pressure on the Federal Reserve to cut interest rates this year.

But the report from the Labor Department on Wednesday will likely not shift Fed officials’ views that temporary factors are behind the weak inflation readings. Airline fares, among the transitory factors identified by Fed Chairman Jerome Powell, rebounded and apparel prices stabilized after two straight monthly decreases.

U.S. central bank policymakers are scheduled to meet on June 18-19 against the backdrop of rising trade tensions, slowing growth and a sharp step-down in hiring in May that has led financial markets to price in at least two rate cuts by the end of 2019. A rate cut is not expected next Wednesday.

“This soft inflation backdrop reinforces our call for two (rate) cuts later this year,” said Michael Feroli, an economist at JPMorgan in New York. “We think next week is probably too soon to expect that action, given that growth is still holding in and trade-related risks remain two-sided.”

The consumer price index edged up 0.1% last month as a rebound in the cost of food was offset by cheaper gasoline, the government said. The CPI gained 0.3% in April.

In the 12 months through May, the CPI increased 1.8%, slowing from April’s 1.9% gain. May’s rise in the CPI was broadly in line with economists’ expectations.

Excluding the volatile food and energy components, the CPI nudged up 0.1% for the fourth straight month, the longest such stretch since April 2017. The so-called core CPI was held down by a sharp decline in the prices of used cars and trucks as well as motor vehicle insurance.

U.S. Treasury prices were trading mostly higher, while the dollar was little changed against a basket of currencies. Stocks on Wall Street slipped as the rate-cut hopes were overshadowed by investor anxiety over the U.S.-China trade war.

U.S. President Donald Trump in early May slapped additional tariffs of up to 25% on $200 billion of Chinese goods, prompting retaliation by Beijing. Trump on Monday threatened further duties on Chinese imports if no deal was reached when he meets Chinese President Xi Jinping at a G20 summit at the end of this month in Japan.

Economists have warned that the tariffs will undercut the economy, which will celebrate 10 years of expansion in July, the longest in history. Powell said last week the Fed was closely monitoring the implications of the trade war on the economy and would “act as appropriate to sustain the expansion.”

Data so far have suggested a sharp slowdown in U.S. economic growth in the second quarter after a temporary boost from exports and an accumulation of inventory early in the year. Job growth slowed sharply in May. Manufacturing production, exports and home sales dropped in April, while consumer spending cooled.

The Atlanta Fed is forecasting gross domestic product to increase at a 1.4% annualized rate in the April-June quarter. The economy grew at a 3.1% pace in the first quarter.

A survey of chief executive officers published on Wednesday showed unease about trade policy negatively impacting sales expectations as well as capital spending and hiring plans over the next six months.

The Fed’s preferred inflation measure, the core personal consumption expenditures (PCE) price index, increased 1.6 percent in the year to April after gaining 1.5% in March. Data for May will be released later this month. The core PCE price index has been running below the Fed’s 2% target this year.

Healthcare costs increased 0.3%, matching April’s rise. That mirrored an increase in healthcare costs at the producer level, suggesting a pickup in the core PCE price index in May. There were gains in hospital and doctor fees. But prices for prescription medication fell 0.2%.

Apparel prices were unchanged in May after tumbling 0.8% in the prior month. They had declined for two months in a row after the government introduced a new method and data to calculate apparel prices. Economists expect the duties on Chinese goods to lift apparel prices in the coming months.

“That’s going to change with new tariffs on the way unless apparel companies can teach other nations to knit sweaters as well as Chinese workers can do,” said Chris Rupkey, chief economist at MUFG in New York.

Prices for used motor vehicles and trucks tumbled 1.4%. That was the largest drop since last September and marked the fourth straight monthly decrease. The cost of motor vehicle insurance fell 0.4%, the most since May 2007. The cost of recreation also decreased.