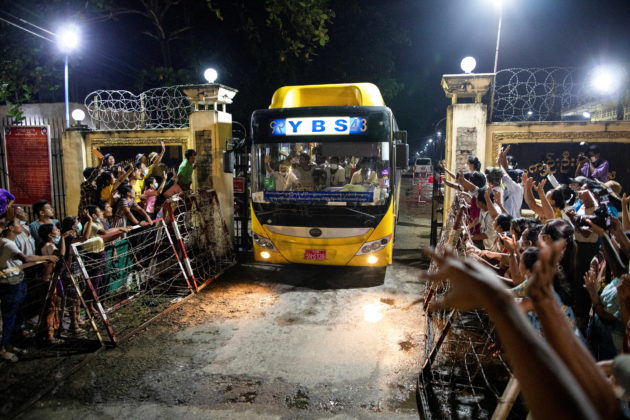 State television announced late on Monday more than 5,600 people arrested or wanted over anti-coup protests would be granted amnesty following a speech from Myanmar’s junta chief saying his government was committed to peace and democracy.

The release was described by some activists as a ploy by the ruling military to try to rebuild its international reputation after the Association of Southeast Asian Nations (ASEAN) took the rare step of excluding the junta chief from its summit.

Shortly after local media began late on Monday documenting the release of parliamentarians, journalists and others from Yangon’s Insein prison and facilities in Mandalay, Lashio, Meiktila and Myeik, reports followed of re-arrests.

Reuters could not independently verify the reports and Myanmar’s prison department spokesman and junta spokesman were not immediately available for comment.

The Assistance Association for Political Prisoners, a non-profit group which has documented killings and arrests since the coup in February, told Reuters that as of Tuesday evening around 40 people had been detained immediately after their release.

Myanmar has been in turmoil since the coup, which ended a decade of tentative democracy and economic reform.

Security forces have killed more than 1,100 people according to activists and the United Nations, and arrested over 9,000 people including Suu Kyi, Myanmar’s most prominent civilian political figure, according to AAPP.

ASEAN decided to invite a non-political representative to its Oct. 26-28 summit in an unprecedented snub to the military leaders behind the coup against Suu Kyi’s elected government.

U.N. Special Rapporteur Tom Andrews welcomed the release but said it was “outrageous” that they were detained in the first place.

“The junta is releasing political prisoners in Myanmar not because of a change of heart, but because of pressure,” he said on Twitter.

The junta has released prisoners several times since the coup, which triggered a wave of protests that were quelled by the security forces.

“They came to me today and said they will take me home, that’s all,” Monywa Aung Shin, a spokesman for Suu Kyi’s National League for Democracy party, told Democratic Voice of Burma late on Monday on his way home from prison.

Monywa Aung Shin was arrested on February 1 and had spent eight months in prison.

Burmese comedian Zarganar, a well-known critic of Myanmar’s past military governments, was also released late Monday, according to local media reports and a social media post by a close friend.

Other images showed a succession of buses leaving the rear entrance of the jail, with passengers leaning from windows and waving at crowds gathered outside.