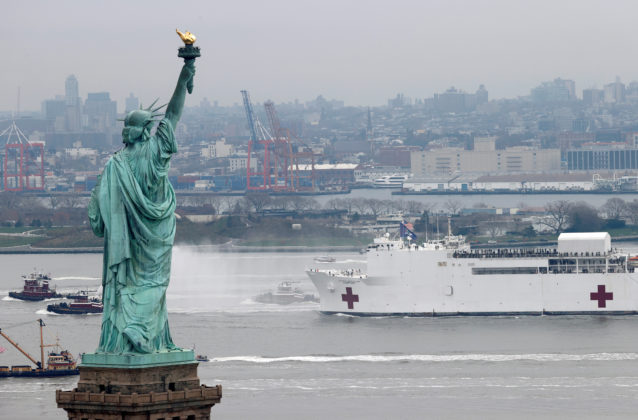 The USNS Comfort passes the Statue of Liberty as it enters New York Harbor during the outbreak of the coronavirus disease (COVID-19) in New York City, U.S., March 30, 2020. REUTERS/Mike Segar

NEW YORK (Reuters) – A 1,000-bed Navy hospital ship docked in Manhattan on Monday and a field hospital was going up in Central Park for coronavirus patients, as officials in New York City, the epicenter of a widening U.S. outbreak, pleaded for more help from Washington.

In an image that captured the hopeful spirit of the national mobilization against the outbreak, the USNS Comfort steamed into New York Harbor, accompanied by a flotilla of support ships and helicopters hovering ahead.

New York Governor Andrew Cuomo, a prominent public figure in the battle to stop the virus, waited at a Midtown Manhattan pier when the converted oil tanker, painted white and adorned with giant red crosses, arrived at about 11 a.m. EDT.

The Comfort will treat non-coronavirus patients, including those who require surgery and critical care, the Navy said.

Hospitals in New York City have been overrun with patients suffering from COVID-19, the respiratory illness caused by the virus. New York state accounts for almost half of the country’s 141,883 cases and more than a third of its 2,477 deaths, according to a Reuters tally. The United States has the most cases in the world.(Graphic: https://tmsnrt.rs/2w7hX9T)

Construction of a 68-bed field hospital began on Sunday in Central Park, and the new site was expected to begin accepting patients on Tuesday, New York City Mayor Bill de Blasio said in a statement.

The makeshift facility, provided by Mount Sinai Health Systems and non-profit organization Samaritan’s Purse, will not take walk-ins, and admissions and transfers will be managed by Mount Sinai, de Blasio said.

De Blasio, among a growing chorus of officials who have voiced frustration at the Trump administration’s handling of the crisis, said the death toll in the city would rise soon if Washington did not provide more medical supplies and assistance.

“If we don’t get more consistent federal help in a growing crisis, there’s a danger we start to lose lives that could have been saved,” the New York City mayor said in an interview with CNN. “Sunday is D-Day, we need help by Sunday.”