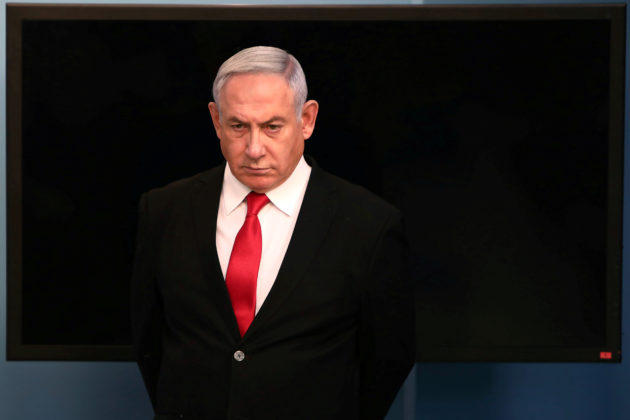 FILE PHOTO: Israeli Prime Minister Benjamin Netanyahu arrives for a speech at his Jerusalem office, regarding the new measures that will be taken to fight the coronavirus, March 14, 2020. Gali Tibbon/Pool via REUTERS/File Photo

JERUSALEM (Reuters) – Israel’s top court on Monday heard challenges to Prime Minister Benjamin Netanyahu’s bid to secure a governing coalition, with opposition figures arguing a deal on a new unity administration would unlawfully shield him in a corruption trial.

The Supreme Court’s 11-justice panel convened for a second day after hearing separate petitions on Sunday against Netanyahu’s authority to form a government given his indictment on charges of bribery, fraud and breach of trust.

Rulings are expected by Thursday. Should the court find against Netanyahu on either front, it would likely trigger a snap election – the fourth since April 2019 – as the country grapples with the coronavirus crisis and its economic fallout.

Netanyahu and his main rival Benny Gantz signed an agreement last month to form a unity government under which they would take turns leading Israel after their three, inconclusive ballot runs. They cited the coronavirus crisis in forming the pact.

In power for more than a decade and currently head of a caretaker government, right-wing Netanyahu would serve as prime minister of a new administration for 18 months before handing the reins to centrist Gantz, according to the unity deal.

Netanyahu, 70, would then assume the role of “substitute prime minister”, which some analysts say would exempt him from a law that requires cabinet-level ministers to resign from public office if they are indicted on criminal charges.

Netanyahu’s trial is due to open on May 24. He has denied any wrongdoing and accused political rivals of a “witch-hunt”.

The coalition deal also grants Netanyahu influence over important judicial appointments, which critics argue gives the premier undue sway over the outcome of his own proceedings.

The pact has support from a majority in parliament. But several groups, including opposition parties and democracy watchdogs, petitioned the Supreme Court to nullify the deal, arguing in part that it shields Netanyahu from legal penalties.

Some analysts have said the court, though cast by Netanyahu loyalists as liberal and interventionist, was unlikely to strike down the deal or bar Netanyahu from forming a government.

Responding to the petitions, Israel’s Attorney-General Avichai Mandelblit said that while certain aspects of the deal “raise major difficulties”, there were no grounds to disqualify it.