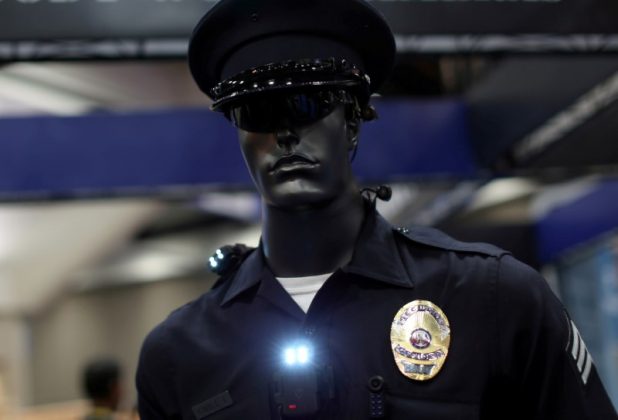 FILE PHOTO: A mannequin dressed as a police officer to show off a body camera system is shown on display at the International Association of Chiefs of Police conference in San Diego, California, U.S. on October 17, 2016. REUTERS/Mike Blake/File Photo

(Reuters) – Police officers in the state of Nevada may soon be required to wear body cameras under a measure that was sent on Thursday to Governor Brian Sandoval for his signature.

The proposal, approved by the state legislature, would make Nevada the second state in the in the country to mandate that state and local police use body cameras. North Carolina passed a similar requirement in 2015.

“Providing every officer with a body camera protects officers while they’re on the job and engenders trust among the public,” state Senator Aaron Ford, the bill’s sponsor, said in an emailed statement on Thursday.

The bill is the latest initiative by Nevada Democrats after voters in November gave them back legislative majorities they had held since 2009 but lost for the 2015-2016 term.

Earlier this month, lawmakers passed a bill banning sexual orientation or gender conversion therapy for minors, signed by Sandoval on Wednesday, and advanced two proposals that would be firsts in the United States: one would allow marijuana use in public establishments and another would set price controls on diabetes drugs.

The body camera requirement expands existing state rules, which require their use by the Nevada Highway Patrol, and mandates that the devices be turned on any time police investigate a crime or stop a citizen.

Holly Welborn, policy director for the Nevada branch of the American Civil Liberties Union, said that while the organization had opposed previous iterations of the rule over privacy and transparency concerns, it supported this year’s version after safeguards were strengthened.

A spokeswoman for Sandoval, Mari St. Martin, said it was Sandoval’s policy not to comment on pending legislation, but confirmed that he had approved the earlier requirement on the highway patrol without objection.