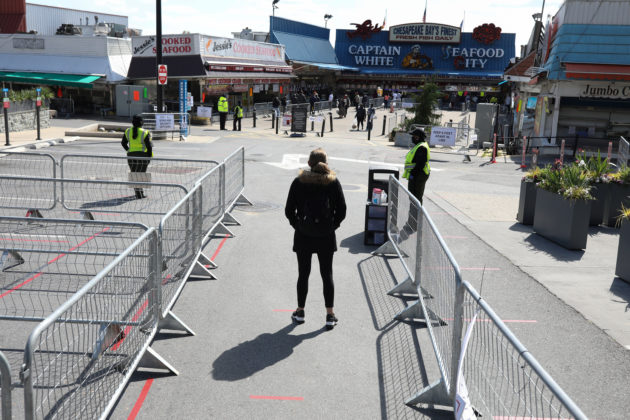 If the U.S. capital, which reported more than 7,200 cases and around 400 deaths by Monday, hits certain metrics, including a declining number of cases over 14 days and sustained low transmission rate, she could lift the order before it expires on June 8.

Neighboring Maryland, home to tens of thousands who commute to D.C. for work, is looking at a different set of data to determine whether it is ready to open up. It includes a plateau in the rate of hospitalizations and the number of cases in hospitals’ intensive-care units.

Virginia, home to tens of thousands more who commute to D.C., has another metric altogether. Governor Ralph Northam said in April the state needed to see a decrease in the percentage of positive tests over 14 days, a decrease in hospitalizations, have enough hospital beds and intensive care capacity and a sustainable supply of personal protective equipment.

This situation, with three different leaders using different criteria to decide how to reopen – has been replicated throughout the country, according to data https://www.nga.org/coronavirus-reopening-plans compiled by the National Governors’ Association.

Luisa Franzini, chair of the Department of Health Policy and Management at the University of Maryland’s School of Public Health, said every state seems to be using its own criteria to determine whether to reopen.

None is really meeting all the metrics set out by the federal government, Franzini said. Instead, local governments appear to be picking “what seems to be working for them.”

New York, the epicenter of the U.S. outbreak, said it would need 30 contact tracers for every 100,000 people, and 90 days of PPE stockpiles before it can “re-open.” Next-door New Jersey is looking for a “14-day trend line” of dropping cases and hospitalizations and has already allowed some beaches to reopen.

Kansas said it needed to see stable or declining case rates over 14 days, but has opened most businesses. Neighboring Missouri, which Kansas City straddles, reopened all business on May 4. South Dakota, site of one of the largest hot spots, said it could not have clusters that posed a risk to the public, and neighboring Minnesota has reopened retail shops.

As the novel coronavirus bore down on the United States, the White House on March 13 issued national state of emergency guidelines and state after state-ordered many businesses closed in a bid to curb the spread.

In April, the federal government provided a set of guidelines on when states should reopen – including declining numbers of COVID-19 cases over the course of 14 days; a downward trajectory of positive tests as a percentage of total tests; and a robust testing program for at-risk healthcare workers.

But, as with many aspects of handling the pandemic, the final say on how to reopen lies with state and local officials, who under the U.S. Constitution hold the authority to make laws related to residents’ health and welfare.

Federal lawmakers, meanwhile, have not set any new standards for workplace safety, although they could.

“There has not been the slightest hint of interest on the part of Congress in creating a national uniform set of rules on business closures and re-openings,” said Robert Chesney, a law professor at the University of Texas. None of the guidelines from the White House are legally binding, he noted.

The patchwork approach means that some states may do better than others at controlling infections, experts say.

“I hate to say it in these terms,” said Raymond Scheppach, a professor of public policy at the University of Virginia, “but I think we’re in a period of experimentation.”

(Reporting by Makini Brice in Washington; Editing by Heather Timmons and Dan Grebler)