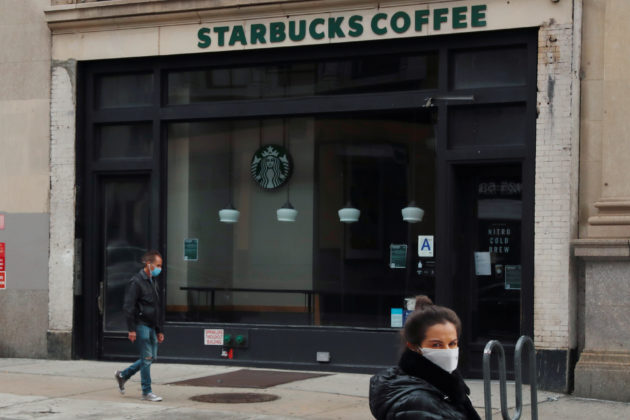 FILE PHOTO: A man wearing a mask walks in front of a shuttered Starbucks as the spread of the coronavirus disease (COVID-19) outbreak continues in the Manhattan borough of New York City, U.S., April 27, 2020. REUTERS/Lucas Jackson/File Photo GLOBAL BUSINESS WEEK AHEAD

By Stephen Coates and Peter Graff

SYDNEY/LONDON (Reuters) – Nations in Asia imposed new restrictions on Monday and an abrupt British quarantine on travelers from Spain threw Europe’s summer reopening into disarray, as the world confronted the prospect of a second wave of COVID-19 infections.

In the United States, where infection rates have been climbing since mid-June, President Donald Trump’s national security adviser Robert O’Brien became the most senior White House official to test positive.

Surges were reported in a number of countries previously singled out as places where the virus was under control.

Just weeks after European countries trumpeted the reopening of tourism, a surge in infections in Spain prompted Britain to order all travelers from there to quarantine for two weeks, torpedoing the travel plans of hundreds of thousands of people.

The World Health Organization said travel restrictions could not be the answer for the long term, and countries had to do more to halt the spread inside their borders by adopting proven strategies such as social distancing and the wearing of masks.

“It is going to be almost impossible for individual countries to keep their borders shut for the foreseeable future. Economies have to open up, people have to work, trade has to resume,” WHO emergencies program director Mike Ryan said.

Officials in some of the European and Asian countries where the virus is again spreading say new outbreaks will not be as bad as the original waves that hit earlier this year, and can be contained with local measures rather than nationwide shutdowns.

But countries that have suffered extreme economic hardship from months of lockdowns are also determined not to let the virus get out of control again, even if that means reversing the path to reopening.

Europe has yet to lift bans on travelers from many countries, including the United States where the White House said national security adviser O’Brien presented no risk of infection for Trump or Vice President Mike Pence.

Britain’s announcement of the return of quarantine for Spain was likely to torpedo the revival of airlines and tourism businesses across the continent, which had thought they had survived their biggest crisis in living memory.

Britain accounts for more than 20% of foreign visitors to Spain, where tourism represents 12% of the economy.

Europe’s biggest airline, Ryanair, cut its annual passenger target by a quarter on Monday and warned a second wave of COVID-19 infections could lower that further.

A British junior health minister said more European countries could end up on the “red list” if infections surge.

“If we see the rates going up, we would have to take action because we cannot take the risk of coronavirus being spread again across the UK,” Helen Whately told Sky News when asked if Germany or France might be next after Spain.

In China, which managed to squelch local transmission through firm lockdowns after the virus first emerged in the central city of Wuhan late last year, a new surge has been driven by infections in the far western region of Xinjiang.

Australian authorities who have imposed a six-week lockdown in parts of the southeastern state of Victoria said it could last longer after the country’s highest daily increase in infections.

“The tragedy of COVID-19 is that we know, with the number of new infections that we have seen today, that there will be many further deaths in the days ahead,” Australian Deputy Chief Medical Officer Michael Kidd told reporters.

In Japan, the government said it would urge business leaders to ramp up anti-virus measures such as staggered shifts, and aimed to see rates of telecommuting return to levels achieved during an earlier state of emergency.

“At one point, commuter numbers were down by 70 to 80%, but now it’s only about 30%,” Economy Minister Yasutoshi Nishimura said late on Sunday. “We really don’t want to backtrack on this, so we have to explore new ways of working and keep telecommuting high.”

Vietnam is evacuating 80,000 people, mostly local tourists, from Danang after three residents tested positive at the weekend. Until Saturday, the country had reported no community infections since April.

North Korean state media reported on the weekend that the border town of Kaesong was in lockdown after a person who defected to South Korea three years ago returned this month with symptoms of COVID-19. If confirmed, it would be the first case officially acknowledged by Pyongyang.

Papua New Guinea halted entry for travellers from Monday, except those arriving by air, as it tightens curbs against infections that have more than doubled over the past week.