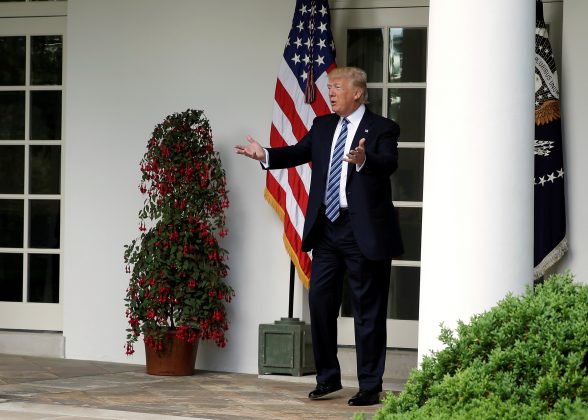 U.S. President Donald Trump speaks to staffers setting up for the Commander in Chief's trophy presentation in the Rose Garden of the White House in Washington, U.S., May 2, 2017. REUTERS/Joshua Roberts

NEW YORK (Reuters) – New York is bracing for President Donald Trump’s first trip back to his hometown since taking office in January in a Thursday visit that is expected to draw protests and snarl traffic in the United States’ most populous city.

The trip could mark a repeat of the chaotic 2-1/2 months between the real estate developer’s Nov. 8 election and Jan. 20 swearing-in, when crowds of protesters and admirers flocked outside his home in the gold-metal-clad Fifth Avenue Trump Tower.

The early days of the Trump administration have brought aggressive rhetoric and moves to crack down on immigration as well as roll back environmental regulations, much of which has ruffled feathers in the liberal northeast city.

Anti-Trump activists, some of whom have organized marches across the country since Trump’s stunning election victory, are planning loud protests to mark the native son’s return.

“A very hot welcome is being planned for Mr. Trump,” said Alexis Danzig, a member of Rise and Resist, an informal group of activists which formed as Trump came to power. “We’ll be out in full force to voice our grievances.”

Trump’s business dealings and romantic fallouts were constant city tabloid fodder in the 1980s and 1990s. His television show, “The Apprentice,” broadcast Trump to the world as the ultimate Big Apple dealmaker during the 2000s.

While the Trump brand is internationally associated with New York, fewer than one in five city residents voted for him.

Mayor Bill de Blasio and Governor Andrew Cuomo, both Democrats, have said his stance on immigrants has put him at odds with a city where nearly a third of residents are foreign-born.

Protesters plan to gather Thursday near the Intrepid Sea, Air and Space Museum, a decommissioned aircraft carrier where Trump and Australian Prime Minister Malcolm Turnbull are to have their first in-person meeting. One of the pair’s last exchanges was an acrimonious phone call in January.

New York police declined to provide details of their preparations for Trump’s tour and the protests planned around it.

One lingering issue from the transition period, that of the costs of protecting the president-elect’s building was resolved earlier this week in a proposed federal budget including $61 million to reimburse New York and other local governments for providing Trump-related security.

“That’s good news for our city and the hardworking police officers faced with this unprecedented security challenge,” de Blasio said in a statement.