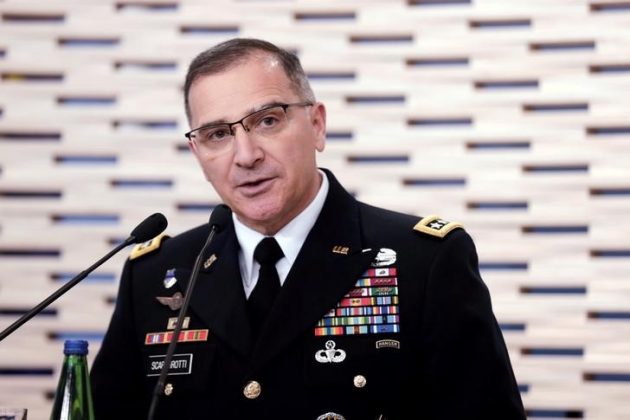 BERLIN (Reuters) – The top U.S. military officer in Europe raised concerns about Turkish air strikes in Syria and Iraq during a meeting last week with Ankara’s chief of general staff in Turkey, a U.S. official said on Tuesday.

General Curtis Scaparrotti told General Hulusi Akar last Friday that the strikes were not properly coordinated with the United States and its allies in their fight against Islamic States, a spokesman for U.S. European Command told Reuters.

U.S. military officials said last week that Turkey gave the U.S.-led coalition less than an hour of advance notice about the air strikes, an insufficient amount of time to ensure the safety of coalition forces on the ground.

“I can tell you General Scaparrotti did express his concern about recent air strikes conducted by Turkey in northern Syria and northern Iraq without proper coordination with the U.S. and coalition,” Captain Danny Hernandez said. “No more details will be provided in order to keep the discussions private.”

Turkey remains a strategic ally of the United States and a vital partner in the fight against violent extremist organizations, added Hernandez, who is based in Stuttgart, home of the U.S. European Command.

A Turkish foreign ministry spokesman said the partners had been informed through both military and diplomatic channels.

Russia has also criticized the air strikes, which it said violated fundamental principles of intergovernmental relations.

The air strikes are part of Turkey’s widening campaign against groups linked to the outlawed Kurdistan Workers Party (PKK), which has waged a three-decade insurgency against Turkey for Kurdish autonomy and are also fighting in Syria and Iraq.

On Tuesday of last week, Turkish planes bombed Kurdish targets in Iraq’s Sinjar region and northeast Syria, killing about 70 militants, according to a Turkish military statement.

The air strikes in Syria targeted the YPG, a key component of the Syrian Democratic Forces (SDF), which are backed by the United States and have been closing in on the Islamic State bastion of Raqqa.

State Department spokesman Mark Toner said after those strikes that Washington had expressed its concerns to the government of Turkey, saying they “were not approved by the coalition and had led to the unfortunate loss of life of our partner forces” in the fight against Islamic State.