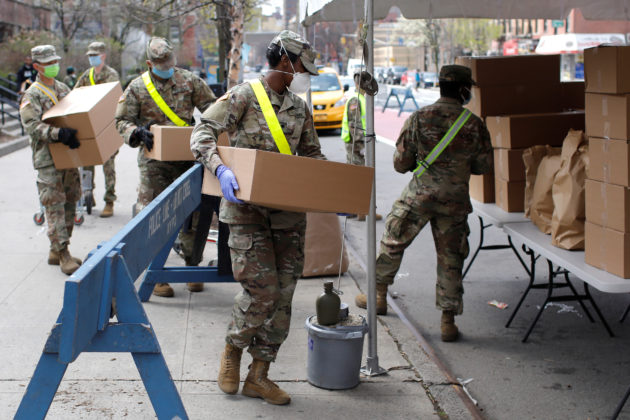 By Peter Szekely and Maria Caspani

NEW YORK (Reuters) – The number of coronavirus cases in New York state alone approached 150,000 on Wednesday, surpassing Spain for the most infections anywhere in the world, even as authorities warned the state’s official death tally may understate the true toll.

New York officials said a recent surge in the number of people dying at home suggests that the most populous U.S. city may be undercounting how many people have died of COVID-19, the respiratory illness caused by the new coronavirus.

Cuomo said 779 people died from the coronavirus in the past day in his state and New Jersey Governor Phil Murphy said another 275 had died there. Both totals exceeded one-day records reported just a day earlier.

Despite the grim tally, Cuomo said overall trends still appear positive, with the rate of hospitalizations down in the state at the epicenter of the U.S. epidemic.

“We need to continue to be absolutely vigilant and, if anything tighten, as opposed to loosen,” Murphy said of coronavirus-related restrictions on residents. “And I don’t say that with any joy.”

President Donald Trump’s administration has called for 30 days of measures, including staying at least six feet (1.8 meters) away from other people, that have upended American life, with most people staying isolated at home, schools and businesses closed and millions losing their jobs. Some 94% of the U.S. population has been ordered to stay at home.

“What’s really important is that people don’t turn these early signs of hope into releasing from the 30 days to stop the spread – it’s really critical,” said Deborah Birx, the coordinator of the White House coronavirus task force.

“If people start going out again and socially interacting, we could see a really acute second wave” of infections, Birx added.

The University of Washington’s Institute for Health Metrics and Evaluation model lowered its projected U.S. death toll by 26%, to 60,000 from 80,000 by August 4. The model is one of several that the White House task force has cited.

The institute also moved up its projected peak in the number to U.S. deaths to this Sunday, when it predicted 2,212 people will succumb to the disease. The revision moves forward the projected peak by four days, suggesting the strain on the country’s healthcare system will lessen sooner than previously expected.

New York Mayor Bill De Blasio estimated an undercount in the death toll of 100 to 200 people per day who are dying at home but excluded from the city’s rapidly growing tally. So far the city’s announced death toll has reflected only COVID-19 diagnoses confirmed in a laboratory.

More than 200 people are dying at home in New York City each day during the pandemic, up from 22 to 32 during the March 20 to April 5 period a year ago, according to city fire officials.

The city will now try to quantify how many of those died from coronavirus-related causes and add that to the its official death toll, New York’s health department said.

“People are dying outside the hospital, unfortunately. It happens every day,” Oren Barzilay, the president of a labor union representing city paramedics, said. “I think those numbers, those statistics in New York for deaths would significantly go up if they tested everyone that expired.”

Authorities in various states have disclosed data showing the health crisis having a disproportionate impact on African Americans, reflecting longstanding racial inequities in health outcomes in the United States.

De Blasio said there were “clear inequalities” in how the coronavirus is affecting his city’s population, though the disparities have been less pronounced than in some other jurisdictions. Data released on Wednesday showed Hispanic residents dying at more than twice the rate as non-Hispanic white people and slightly outpacing the death rate of African Americans in the city.