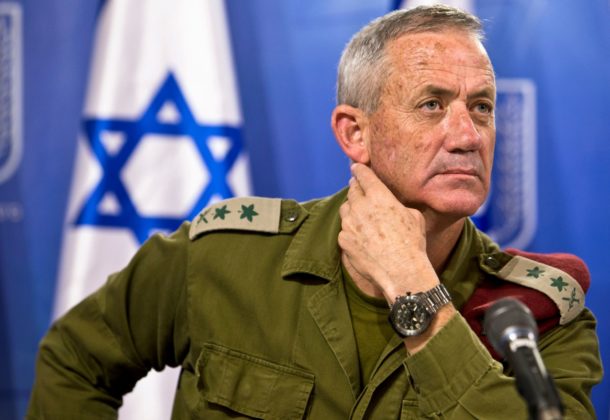 TEL AVIV (Reuters) – Benny Gantz has little of Prime Minister Benjamin Netanyahu’s worldly polish or flair as a showy ideologue – and that may be exactly why so many weary Israelis want the ex-general in top office.

A towering and laid-back former military chief, Gantz appears to have edged out the conservative Netanyahu in a Tuesday election, but not enough to win a governing center-left majority in parliament led by his Blue and White party.

A weakened Netanyahu, whose right-wing Likud party also fell short of victory, called on Gantz, 60, on Thursday to join him a broad, unity government. Gantz insists he will not enter an alliance with Netanyahu.

Earlier, Netanyahu was wont to point out that Gantz is a political greenhorn whose foreign policy pedigree is a stint as defense attache at the Israeli embassy in Washington – a resume unlikely to impress world leaders like President Donald Trump.

Gantz casts himself as more diplomatically accommodating than Netanyahu, urging redoubled efforts to restart peace talks with the Palestinians but stopping short of any commitment to the statehood they seek.

To his critics, that kind of haziness shows indecisiveness and lack of principle. Gantz, who was raised on a collective farm and spent some of his school years in a religious Jewish seminary, describes himself as having more grit than varnish.

“You know I’m not strong with words,” he told a Jerusalem conference earlier this month. “I say honestly – I’m not a politician. A leader? I hope that (I am that), yes.”

Gantz, who is married with four children, has acknowledged his easy-going appeal, telling reporters on Wednesday that he aspired to enter a “good, desirable unity government, so the country can relax a little”.

But he has also shown steel. He launched his political career earlier this year with a bombastic ad campaign that claimed credit for hundreds of “terrorist” kills in Gaza – a reference to wars he oversaw against Hamas Islamists, and whose civilian Palestinian toll drew international condemnation.

Indeed, as Israelis voted on Tuesday, a Dutch Palestinian who lost six relatives to Israeli forces in Gaza in 2014 sought war crimes damages against Gantz at The Hague. Gantz fired back defiantly that Israel has “the most moral army in the world”.

But in making Blue and White Israel’s largest party in parliament – just edging past Likud, according to near-complete results – many Israelis evidently felt overtaxed by more than a decade of Netanyahu rule.

Netanyahu, Israel’s longest-serving leader, faces possible indictment in three corruption cases in which he denies any wrongdoing. During his decade in power, internal divisions and diplomatic stalemate with the Palestinians have deepened.

“When I look at Gantz, I see someone I can trust, who is honest and sincere. He is a role model,” Tami Golan, a 46-year-old Tel Aviv property manager, told Reuters.

“He gives me hope we can be united as a country,” the mother of two said.

Netanyahu has accused Gantz of being gunshy when it came to a potential military confrontation with arch-foe Iran. Gantz says that he prepared a plan for attacking Iranian nuclear sites but that it was Netanyahu who failed to green-light it.

As top general, Gantz says, he was guided by his late mother, a Holocaust survivor. While she supported Israel’s fight against Hamas, he recounted in later media interviews, she exhorted him to “keep the food coming in” to impoverished Gaza.

Among factors that could decide if Gantz forms the next government, assuming a partnership with Netanyahu does not materialize, is whether he gets a nod from a party list that represents Israel’s Arab minority.

While some Arab politicians have voiced misgivings about Gantz’s record in uniform, others have hinted they may grudgingly back him as an antidote to Netanyahu.

The Palestinians have not ruled Gantz out as peace partner.

“We do respect (the) democratic outcome of elections in Israel. Whoever will form the government – we are ready to sit with him or her to restart the negotiations,” Palestinian Foreign Minister Riyad al-Maliki said at a news conference in Oslo on Wednesday.