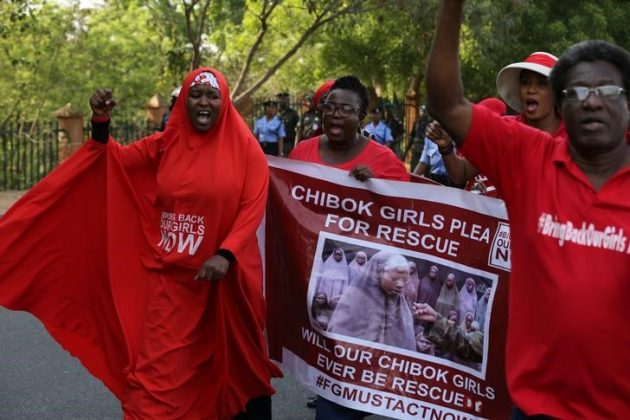 Campaigners from the #BringBackOurGirls group protest in Nigeria's capital Abuja to mark 1,000 days since over 200 schoolgirls were kidnapped from their secondary school in Chibok by Islamist sect Boko Haram, Nigeria January 8, 2017. REUTERS/Afolabi Sotunde

ABUJA (Reuters) – Nigeria is in talks to release the remaining captive Chibok girls, its president said on Thursday, a day before the third anniversary of the kidnapping of 276 schoolgirls by Islamist insurgents Boko Haram.

The kidnapping is one of the most infamous of Boko Haram’s insurgency, now in its eighth year and with little sign of an end. More than 20 girls were released in October in a deal brokered by the International Red Cross. Others have escaped or been rescued but 195 are believed to be still in captivity.

“(The government) is in constant touch through negotiations, through local intelligence to secure the release of the remaining girls and other abducted persons unharmed,” President Muhammadu Buhari said in a statement.

“We have reached out to their captors, through local and international intermediaries, and we are ever ready to do everything within our means to ensure the safe release of all the girls,” he said.

Buhari’s government has repeatedly promised to secure the release of the Chibok girls, and in October the president said efforts would be “redoubled”.

At the time, the presidency also said Boko Haram was willing to negotiate the release of 83 more girls, though none have been let go so far, spurring criticism from campaign groups over the government’s handling of the talks.

Although the Chibok girls are the most high-profile case — triggering a worldwide social media campaign — Boko Haram has kidnapped thousands of adults and children, many of whose cases are neglected, say aid organisations.

The use of kidnapped children as suicide bombers by the insurgents of Boko Haram has surged this year, the United Nations Children’s Fund (UNICEF) said on Wednesday.

The militants have killed more than 20,000 people and displaced more than two million during their insurgency aimed at creating an Islamic caliphate in northeast Nigeria.

Despite the army saying the insurgency is on the run, large parts of northeast Nigeria, particularly in Borno state, remain under threat from Boko Haram. Suicide bombings and gun attacks have increased in the region since the end of the rainy season late last year.