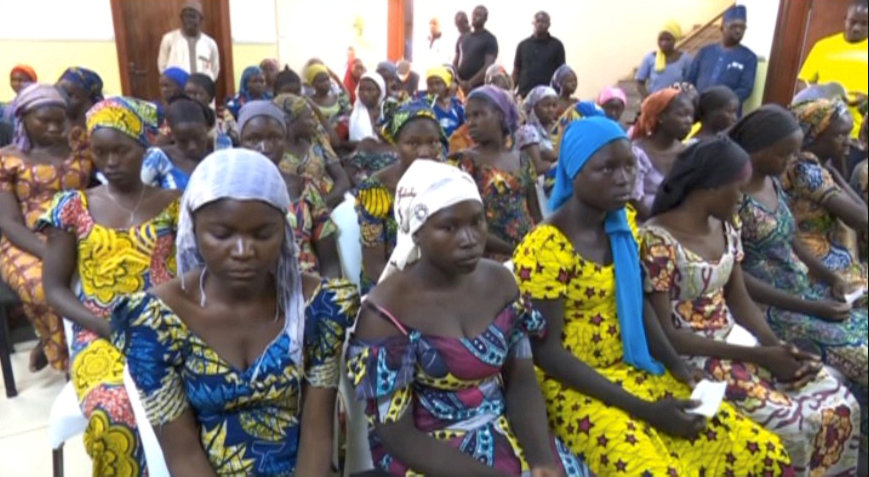 ABUJA (Reuters) – More than 100 girls who were kidnapped by Boko Haram militants in the Nigerian town of Chibok in 2014 are ready to return to normal life after being released and receiving psychological and medical treatment, the government said on Friday.

Some 270 girls were originally abducted by the Islamist group but 82 were freed in May this year after mediation, adding to 24 who were released or found last year. The girls have been receiving psychological and medical care in the capital, Abuja, as part of a government rehabilitation program.

“All the 106 girls are now fully recovered, ready for re-integration with their families and the larger society, and to go back to school,” Aisha Jummai Alhassan, minister of women affairs, told a news conference.

“They are now stabilized and most of their traumatic stress disorder symptoms have been overcome and previously frequent incidents of flashbacks, insomnia and nightmares have now been successfully brought under control,” she said.

Some of them underwent surgery, and a prosthetic limb was provided for a girl who lost a leg while in captivity. Four babies were also said to be in good health.

Of the 270 girls who were originally taken, about 60 escaped soon afterwards but around 100 are still believed to be in captivity. Alhassan said negotiations to secure their release were ongoing.

Boko Haram has killed more than 20,000 people and displaced more than two million during an eight-year insurgency aimed at creating an Islamic caliphate in northeast Nigeria.

The Chibok case provoked global outrage and a celebrity-backed campaign to raise awareness of the girls’ plight, but aid groups say Boko Haram has kidnapped thousands more adults and children, many of whose cases are neglected.

A United Nations human rights committee called in July for Nigeria’s government to step up efforts to rescue all women and girls abducted by Boko Haram and ensure they returned to school without stigma. 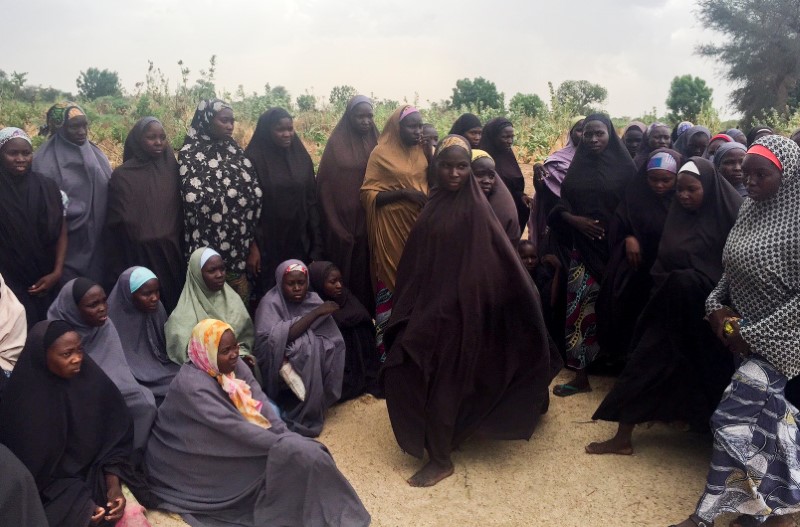 ABUJA (Reuters) – Another Nigerian schoolgirl from the kidnapped group known as the “Chibok girls” has escaped from her captivity by Islamist insurgency Boko Haram, a presidential spokesman said on Wednesday.

The escape makes her the latest to return of the roughly 270 girls kidnapped by Boko Haram in April 2014 from the northeastern town of Chibok. Earlier this month, the militants swapped 82 of the girls in exchange for prisoners.

Vice President Yemi Osinbajo at a cabinet meeting in the capital Abuja on Wednesday “announced that another Chibok schoolgirl had been found after she escaped from her captors,” said the spokesman.

“I learned she is already being brought to Abuja,” he said, giving no further details.

Of the 270 girls originally kidnapped, around 60 have escaped and more than 100 have been released. About 100 more are still believed to be in captivity.

Boko Haram’s insurgency has killed more than 20,000 people and displaced more than two million since 2009 in an attempt to create an Islamic caliphate in northeastern Nigeria.

Three years ago, the abduction of the girls from their secondary school by Boko Haram sparked global outrage and a celebrity-backed campaign #bringbackourgirls.

For more than two years there was no sign of the girls. But the discovery of one of them with a baby last May raised hopes for their safety, with a further two girls found in later months and a group of 21 released by the Islamist militants in October.

Although the Chibok girls are the most high-profile case, Boko Haram has kidnapped thousands of adults and children, many of whose cases are neglected, say aid organization’s.

ABUJA/MAIDUGURI, Nigeria (Reuters) – Boko Haram militants have released 82 schoolgirls out of a group of more than 200 whom they kidnapped from the northeastern town of Chibok three years ago in exchange for prisoners, the presidency said on Saturday.

Around 270 girls were kidnapped in April 2014 by the Islamist militant group, which has killed 15,000 people and displaced more than two million during a seven-year insurgency aimed at creating an Islamic caliphate in northeastern Nigeria.

Dozens escaped in the initial melee, but more than 200 remained missing for more than two years.

Nigeria thanked Switzerland and the International Committee of the Red Cross for helping secure the release of the 82 girls after “lengthy negotiations”, the presidency said in a statement.

President Muhammadu Buhari will receive the girls on Sunday afternoon in the capital Abuja, it said, without saying how many Boko Haram suspects had been exchanged or disclosing other details.

A military source said the girls were brought on Sunday morning from Banki near the Cameroon border to Maiduguri, the capital of Borno state where the insurgency started.

The release of the girls may give a boost to Buhari who has hardly appeared in public since returning from Britain in March for treatment of an unspecified illness.

He made crushing the insurgency a pillar of his election campaign in 2015.

The army has retaken most of the territory initially lost to the militants but attacks and suicide bombings by the group have made it nearly impossible for displaced persons to return to their recaptured hometowns.

“The President directed the security agencies to continue in earnest until all the Chibok girls have been released and reunited with their families,” the presidency said.

More than 20 girls were released last October in a deal brokered by the International Committee of the Red Cross. Others have escaped or been rescued, but 195 were believed to be still in captivity.

Buhari said last month that the government was in talks to secure the release of the remaining captives.

Although the Chibok girls are the most high-profile case, Boko Haram has kidnapped thousands of adults and children, many of whose cases have been neglected.

Although the army has retaken much of the territory initially lost to Boko Haram, large parts of the northeast, particularly in Borno state, remain under threat from the militants. Suicide bombings and gun attacks have increased in the region since the end of the rainy season late last year.

Some 4.7 million people in northeast Nigeria depend on food aid, some of which is blocked by militant attacks, some held up by a lack of funding and some, diplomats say, stolen before it can reach those in need.

Millions of Nigerians may soon be in peril if the situation deteriorates, as authorities expect, when the five-month rainy season begins in May and makes farming impossible in areas that are now accessible.

This part of Nigeria is the western edge of an arc of hunger stretching across the breadth of Africa through South Sudan, Somalia and into Yemen on the Arabian peninsula. The United Nations believes as many as 20 million people are in danger in what could become the world’s worst famine for decades. 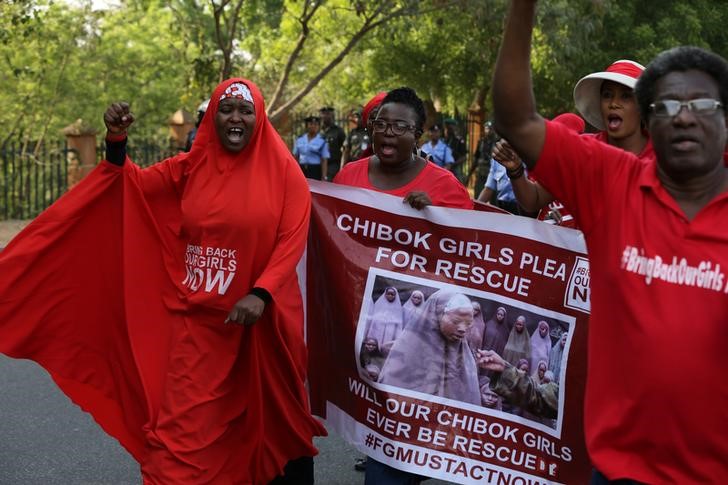 ABUJA (Reuters) – Nigeria is in talks to release the remaining captive Chibok girls, its president said on Thursday, a day before the third anniversary of the kidnapping of 276 schoolgirls by Islamist insurgents Boko Haram.

The kidnapping is one of the most infamous of Boko Haram’s insurgency, now in its eighth year and with little sign of an end. More than 20 girls were released in October in a deal brokered by the International Red Cross. Others have escaped or been rescued but 195 are believed to be still in captivity.

“(The government) is in constant touch through negotiations, through local intelligence to secure the release of the remaining girls and other abducted persons unharmed,” President Muhammadu Buhari said in a statement.

“We have reached out to their captors, through local and international intermediaries, and we are ever ready to do everything within our means to ensure the safe release of all the girls,” he said.

Buhari’s government has repeatedly promised to secure the release of the Chibok girls, and in October the president said efforts would be “redoubled”.

At the time, the presidency also said Boko Haram was willing to negotiate the release of 83 more girls, though none have been let go so far, spurring criticism from campaign groups over the government’s handling of the talks.

Although the Chibok girls are the most high-profile case — triggering a worldwide social media campaign — Boko Haram has kidnapped thousands of adults and children, many of whose cases are neglected, say aid organisations.

The use of kidnapped children as suicide bombers by the insurgents of Boko Haram has surged this year, the United Nations Children’s Fund (UNICEF) said on Wednesday.

The militants have killed more than 20,000 people and displaced more than two million during their insurgency aimed at creating an Islamic caliphate in northeast Nigeria.

Despite the army saying the insurgency is on the run, large parts of northeast Nigeria, particularly in Borno state, remain under threat from Boko Haram. Suicide bombings and gun attacks have increased in the region since the end of the rainy season late last year.