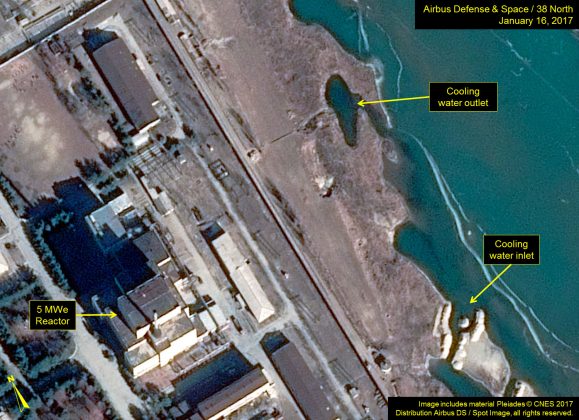 “Imagery from January 22 shows a water plume (most probably warm) originating from the cooling water outlet of the reactor, an indication that the reactor is very likely operating,” it said in a report.

It said it was impossible to estimate at what power level the reactor was running, “although it may be considerable.” A 38 North Korea report last week said operations at the reactor had been suspended since late 2015.

North Korea has maintained its nuclear and missile programs in violation of repeated rounds of international sanctions.

News of the apparent reactor restart comes at a time of rising concern about North Korea’s weapons programs, which could present the new administration of U.S. President Donald Trump with its first major crisis.

A report by leading U.S.-based nuclear expert Siegfried Hecker published by 38 North last September estimated North Korea had stockpiles of 32 to 54 kg (70 to 119 pounds) of plutonium, enough for 6 to 8 bombs, and had the capacity to produce 6 kg, or approximately one bomb’s worth, per year.

North Korea also produces highly enriched uranium for atomic bombs and would have sufficient fissile material for approximately 20 bombs by the end of last year, and the capacity to produce seven more a year, that report said.

In a New Year speech, North Korean leader Kim Jong Un said his country was close to test launching an Intercontinental Ballistic Missile (ICBM) and state media has said a launch could come at any time.

Trump’s defense secretary plans to visit Japan and South Korea next week and shared concerns about North Korea are expected to top his agenda.