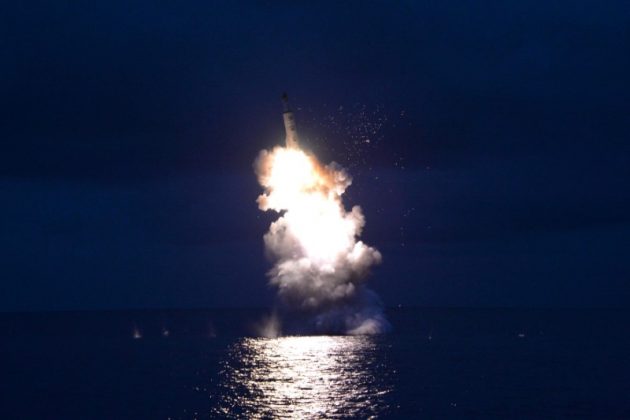 The missile had a range of more than 2,000 kms (1,240 miles), according to South Korea’s intelligence agency. It reached an altitude of about 550 km and flew about 500 km towards Japan before splashing into the sea east of the Korean peninsula.

The U.N. Security Council on Monday denounced the launch, urging members to “redouble efforts” to enforce sanctions against the reclusive state, but gave no indications of any action it might take.

Han Tae Song, the new Ambassador of the Democratic People’s Republic of Korea (DPRK) to the United Nations in Geneva, addressed the U.N.-backed Conference on Disarmament a day after taking up his post.

“The various test fires conducted by DPRK for building up self-defense capabilities are, with no exception, self-defense measures to protect national sovereignty and the safety of the people against direct threats by hostile forces,” Han told the 61-member-state forum.

“My delegation strongly rejects the latest statement of the U.N. Security Council and all U.N. resolutions against my country.”

U.S. Ambassador Robert Wood said: “All efforts to advance North Korea’s nuclear weapons and ballistic missile capabilities must cease,” adding: “If ever there were a situation that called for international collective action to ensure our mutual security, it is this.”

China, North Korea’s main ally, said the missile launch violated Security Council resolutions but called on all parties to “exercise restraint”. The way to defuse the situation was through dialogue, China said, calling for a return to talks.

U.S., Japanese and South Korean military officials held a teleconference on Monday in which they condemned the launch as “a clear violation” of multiple Security Council resolutions. The United States “reaffirmed its iron-clad security commitments” to South Korea and Japan, the Pentagon said.

Han said the divided Korean peninsula “remains the world’s biggest hotspot with a constant danger of war”. He condemned joint military exercises carried out annually by South Korea and the United States, as well as what he called “nuclear threats” and blackmail towards his country.

“It is the legitimate self-defense right of the sovereign state to possess strong deterrence to cope with such threat by hostile forces aimed at overthrowing the state and the socialist system,” he said.

South Korea’s Ambassador Choi Kyong-lim said the test showed “the unreasonable nature of the DPRK and their fanatical obsession with the pursuit of nuclear weapons and ballistic missiles”. Japan’s disarmament Ambassador Nobushige Takamizawa urged Pyongyang not to take further “provocative actions” that undermine peace and security in the region.