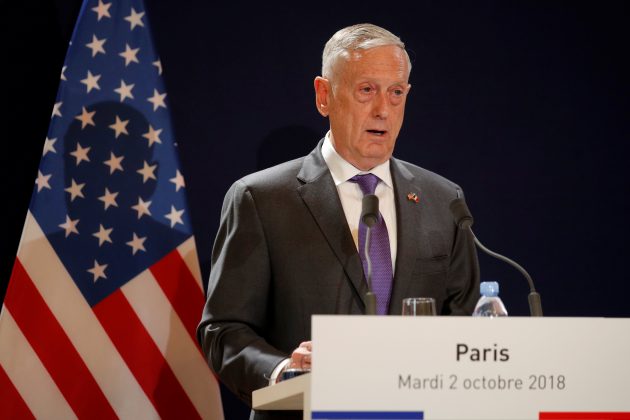 PARIS (Reuters) – The number of U.S. diplomats in Syria has doubled as Islamic State fighters near a military defeat, U.S. Defense Secretary Mattis said on Tuesday.

The U.S.-led coalition, along with local partners, has largely cleared the militant group from Iraq and Syria but remains concerned about its resurgence.

“Our diplomats there on the ground have been doubled in number. As we see the military operations becoming less, we will see the diplomatic effort now able to take (root)” Mattis said.

He did not give a specific number.

A U.S. official, speaking on the condition of anonymity, said Mattis was referring to State Department employees, including diplomats and personnel involved in humanitarian assistance, and the increase was recent.

The United States does not have an embassy in Syria.

In a sign of the threat still posed by the militant group, security forces in northern Syria’s Raqqa said on Sunday they had uncovered an Islamic State sleeper cell which was plotting large attacks across the devastated city.

In June, the SDF imposed a three-day curfew in Raqqa and declared a state of emergency, saying Islamic State militants had infiltrated the city and were planning a bombing campaign.

“We are still in a tough fight, make no mistake about it,” Mattis said.

He said troops would work after the defeat of Islamic State to ensure that the militant group did not return.

Russia has held the balance of power in Syria, both on the battlefield and in the U.N.-led peace talks, for the past two years. It has helped Syrian President Bashar al-Assad recover huge amounts of lost territory without persuading him to agree to any political reforms.

But nine rounds of talks, most of them in Geneva, have failed to bring the warring sides together to end a conflict that has killed hundreds of thousands of people and driven millions from their homes.

The United States has said it will pursue “a strategy of isolation”, including sanctions, with its allies if Assad holds up a political process aimed at ending Syria’s seven-year-old war.