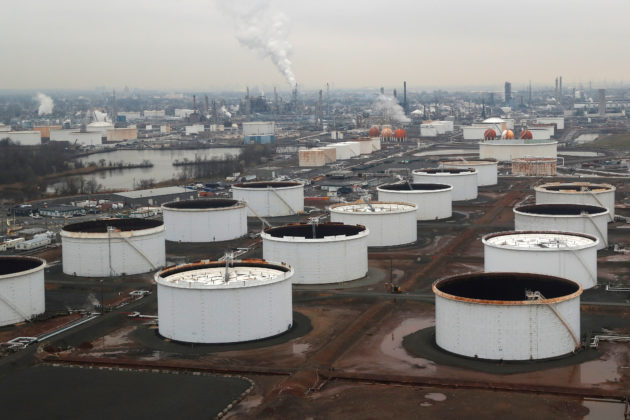 NEW YORK (Reuters) – Oil prices fell on Wednesday after data showed U.S. crude inventories rose last week by the most since 2016 while gasoline demand suffered its biggest weekly drop ever due to the coronavirus pandemic.

The market has slumped on pledges of higher output from Saudi Arabia and Russia after a supply pact collapsed and the sharp fall in demand because of the coronavirus pandemic. Brent crude fell 66% in the first three months of 2020 – its biggest ever quarterly loss.

“Global inventories will be chock full by mid-May. I think the market can continue to decline further,” said Gene McGillian, a broker and oil analyst at Tradition Energy.

“There’s no signs of reproachment with producers and with further demand destruction we could get another $5 taken from the market.”

U.S. state governments have issued orders trying to halt the spread of the virus, and many residents are staying out of their cars. Gasoline demand fell by the most ever in one week, with products supplied, a proxy for demand, dropping by 2.2 million barrels per day to 6.7 million bpd. That augurs for more refining cutbacks down the road.

The bearish mood has been fueled by a rift within the Organization of the Petroleum Exporting Countries (OPEC). Saudi Arabia and other OPEC members have been unable to agree to a technical meeting in April to discuss sliding prices.

An OPEC-led supply deal fell apart on March 6 when Russia refused to cut output further. Saudi Arabia has already begun to boost output, a Reuters OPEC survey showed on Tuesday, and is expected to pump more in April. [OPEC/O]

“It is very unlikely that OPEC, with or without Russia or the United States, will agree a sufficient volumetric solution to offset oil demand losses,” BNP Paribas analyst Harry Tchilinguirian said in a report on Tuesday.

U.S. President Donald Trump on Tuesday said he would join Saudi Arabia and Russia, if need be, for talks about the fall in oil prices.