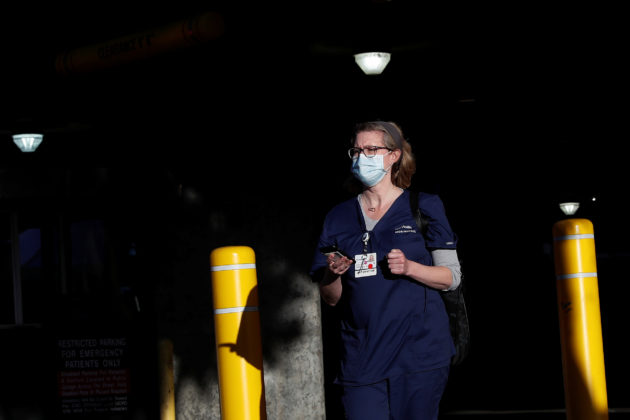 A hospital worker walks out of a garage amid an outbreak of the coronavirus disease (COVID-19), at the University of California San Francisco Parnassus campus in San Francisco, California, U.S., April 1, 2020. REUTERS/Shannon Stapleton

(Reuters) – The World Health Organization (WHO) voiced deep concern on Wednesday about the rapid escalation and global spread of the coronavirus. “In the next few days, we will reach 1 million confirmed cases and 50,000 deaths worldwide,” WHO Director-General Tedros Adhanom Ghebreyesus said.

** For an interactive graphic tracking the global spread, open https://tmsnrt.rs/3aIRuz7 in an external browser.

** U.S.-focused tracker with state-by-state and county map, open https://tmsnrt.rs/2w7hX9T in an external browser.

** Italy’s daily death toll on Wednesday was the lowest in six days, but the overall number of new infections grew and the government extended a national lockdown until at least mid-April.

** Britain’s prime minister promised to ramp up testing after his government faced criticism for being slower than some European peers to roll out mass checks.

** The restrictive measures Ireland put in place last week may well be extended beyond the initial deadline of April 12, deputy prime minister said.

** The separatist government of Spain’s Catalonia region abandoned its initial reluctance and asked the national military for assistance.

** Serbia will revoke a decree giving the government control over information on the outbreak, following protests and the detention of a journalist for reporting a major hospital lacked protective gear and properly trained staff.

** Poland may face a peak in infections in April, government spokesman said, adding that further curbs on people’s movements could not be ruled out.

** EU executive chief expressed concern that restriction measures taken by Hungary went too far and insisted they should be limited in time and subject to scrutiny.

** Four new states imposed sweeping stay-at-home directives on Wednesday, putting over 80% of Americans under lockdown as the number of deaths in the United States nearly doubled in three days.

** About 1,000 sailors from a virus-hit U.S. aircraft carrier were under quarantine at a U.S. naval base on Guam on Thursday.

** Presidents Donald Trump and Jair Bolsonaro discussed cooperation between United States and Brazil, as Brazil’s health minister warned that infection rates and lack of medical supplies were a big concern.

** Mexico’s president urged companies to keep paying workers or face public scorn, even as criticism of his economic management grows.

ASIA AND THE PACIFIC

** Mainland China logged fewer new infections on Thursday, but measures restricting movement were tightened in some areas due to a fear of more imported cases.

** India reported its biggest single day increase in cases as officials raced to track down some 9,000 people exposed to the country’s biggest infection cluster during a Muslim missionary group’s gathering last month.

** Facing calls to declare a state of emergency, Japan’s prime minister was derided on social media for instead offering people cloth masks, pointing to growing frustration with his handling of the crisis.

** Indonesia plans to give special assistance to residents of Jakarta within two weeks to limit the exodus from the capital during the Ramadan holiday period.

** South Korea will allow coronavirus patients to vote by mail or as absentees in parliamentary elections this month.

** WHO expects the number of cases in Malaysia to peak in mid-April, saying there are signs of a flattening of the infection curve.

** Singapore suffered its fourth death on Thursday, a day after it reported a record number of new cases that took its total to 1,000.

** Iran’s president said the United States had missed an opportunity to lift sanctions on his country, though he said the penalties had not hampered Tehran’s fight against the virus which has killed more than 3,100 people in the country.

** Turkey’s tourism minister said he expected flights to return to normal by the end of June, as the country planned to step up measures if the virus keeps spreading and people ignore “voluntary” quarantine rules.

** Israel’s health minister and his wife were diagnosed with the virus.

** World stocks were pinned down on Thursday by the rising death toll and deepening economic pain, with another record week of jobless claims expected in the United States. [MKTS/GLOB]

** World food prices fell sharply in March, hit by a drop in demand and a plunge in global oil prices, the United Nations food agency said.

** The European Commission will propose a package to help the EU economy, including a short-time work scheme, easier access to funds for farmers and fishermen, and financing for development projects.

** British consumers will receive a three-month freeze on loan and credit card payments, under plans outlined by the financial regulator.

** China will relax or remove restrictions on car purchases in some regions to help sales of new vehicles, while accelerating plans to boost the scrapping of old ones.

** Light vehicle sales in the United States fell nearly 27% in March, compared with a month earlier.

** Mexico’s economy is forecast to contract by as much as 3.9% in 2020, the finance ministry said on Wednesday, adding that the numbers incorporated a “drastic” virus impact.

** Factories fell quiet across much of the world in March as the pandemic paralyzed economic activity, with evidence mounting that the world is sliding into deep recession.