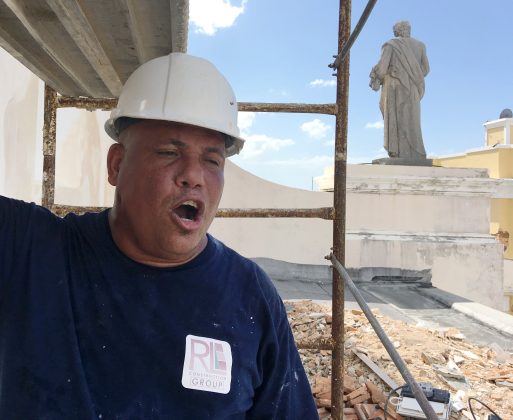 By Hugh Bronstein and Gabriel Stargardter

The city’s colonial heart is usually noisy and bustling with life but on Wednesday Santos’ booming voice was the dominant sound. Since Hurricane Maria struck Puerto Rico, cutting off power and communications to much of the island, tourism has come to a near halt, and Old San Juan’s restaurants, bars and clubs have been hit hard.

The old city’s historic luxury hotel, El Convento, remains full, its staff said, thanks to dozens of U.S. federal employees sent in after the storm. But it is unclear how long they will stay and who will replace them once they leave.

Yadiel Martinez, 24, a supervisor at the hotel, said local tourism was just starting to recover from a difficult 2016 when the Zika virus outbreak led to thousands of cancellations.

Now, with Maria striking just before the high season begins in October, the tourism industry is taking another hit. Like many other hotels in the city, El Convento still does not have consistent water and electricity, Martinez said, and bookings are being canceled.

Compounding a bad situation, the bankrupt island is still struggling to get past a decade-long recession and a $72 billion debt crisis. It needs all the tourist revenue it can get.

“This is going to hit us very hard,” Martinez said, noting that El Convento would likely be affected for months but was not in as dire straits as many tourist-dependent businesses.

“Lots of hotels are going to close,” he predicted.

In Nono’s, a popular bar in Old San Juan, some Puerto Ricans were doing their bit to reactivate the local economy.

Nursing a Bud Light with a Fireball-and-horchata chaser, 37-year-old Brenda Ansa said she was on “forced vacation” from work in the wake of the hurricane.

With her dentist husband attending to an emergency, she said, she decided to come see how the old town had fared over a pre-lunch drink. She was surprised at the absence of people.

Still, in some ways, Old San Juan is one of the city’s bright spots.

While the area sustained damage to roofs, windows and vegetation, most of the sturdy buildings in the historic neighborhood, a UNESCO World Heritage Site, came through the storm without major damage.

The old town’s fortified walls were built by the Spanish after the city was founded in 1508 by Ponce de Leon, and the cathedral where Santos, the singing plasterer, was working has survived 496 hurricane seasons.

Santos, 47, said his fellow workers in the old city appreciate his songs in the aftermath of the storm, especially one of the Cathedral’s priests.

“When I stop, he comes out and complains,” Santos said with a grin, before launching into another full-throated ballad.

Carlos Hernandez, 62, a refuse collector, was optimistic about the long-term future of the old city, even as he swept up debris from the storm.

“Tourism has gone to zero. Those who are here are residents and it’s up to us to do the cleanup,” he said with a wide, toothless smile.

But “I am a Boricua,” he said, employing a phrase islanders use to describe themselves. “And to keep a Boricua down, you have to hit him hard – and I mean hard!”