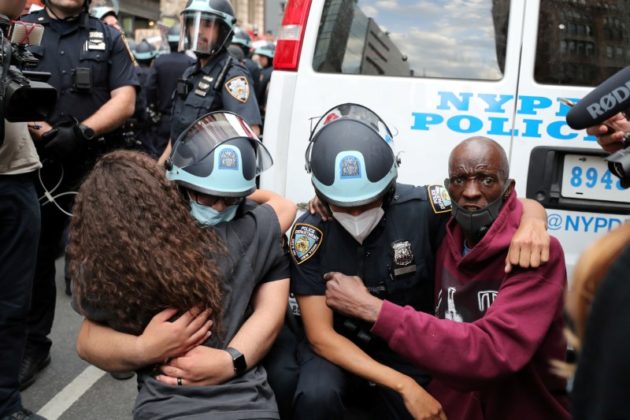 FILE PHOTO: Police officers embrace with demonstrators during a protest against the death in Minneapolis police custody of George Floyd, in the Manhattan borough of New York City, U.S., June 2, 2020. REUTERS/Jeenah Moon/File Photo

WASHINGTON/NEW YORK (Reuters) – Responses by law enforcement authorities in the U.S. capital and in Flint, Michigan, to protests over the police killing of George Floyd illustrated starkly contrasting approaches to handling angry crowds on American streets and repairing relations with grieving communities.

Sheriff Christopher Swanson of Michigan’s Genesee County was keenly aware that some protests in other cities against police brutality after the May 25 death of Floyd, an unarmed black man, in police custody in Minneapolis had descended into arson and looting.

Tensions were rising in Flint on Saturday when Swanson saw a few officers actually exchange friendly fist-bumps with protesters. So Swanson removed his helmet, strode into the crowd, hugged two protesters and told them, “These cops love you.” Swanson then joined the march.

“We’ve had protests every night since then. … Not one arrest. Not one fire. And not one injury,” Swanson said in a telephone interview.

Federal law enforcement officers took a far less conciliatory approach on Monday evening in confronting a crowd of peaceful protesters outside the White House. The officers charged and used tear gas to clear a path for President Donald Trump to walk to a nearby church for a photo opportunity holding up a copy of the Bible.

“Not only is it a terrible tactic and unsafe … it also is sending a tone as if this is the president that has ordered this,” said Ronald Davis, who headed the Justice Department’s Office of Community Oriented Policing Services under Trump’s predecessor Barack Obama.

Davis oversaw a task force that in 2015 released new federal guidelines for improving police practices after demonstrations that turned violent over the 2014 police killing of a young black man named Michael Brown in Ferguson, Missouri, one of a long list of similar killings.

The guidelines addressed ways to improve trust between police and their communities and included recommendations to prevent protests from escalating into violence.

They advised officers to ease rather than rush into crowd control measures that could be viewed as provocative, to consider that anger over longstanding racial disparities in the American criminal justice system was the root cause of such protests and to not to start out with the deployment of masked, helmeted officers and military-style weapons.

That approach appears to have been seldom used in protests that have engulfed many U.S. cities since Floyd’s death after a white police officer knelt on his neck for nearly nine minutes during his arrest.

For example, police in New York City have used pepper spray on protesters, hit people with batons and in one case drove two cruisers into a crowd. In New York and some other cities police themselves have been the target of violence.

“If we were dealing with traditional, peaceful protest, everything would have been different,” New York Mayor Bill de Blasio told reporters on Monday.

“They know that there are people who have announced beforehand that they intend to do violence both to property and to other people,” McCoy said. “The notion that the property destruction could have somehow been prevented is, I think, perhaps naive.”

New York police were heckled by some demonstrators when some officers knelt in solidarity at a Brooklyn protest. During a Manhattan protest, a police officer shook the hand of a young woman wearing a T-shirt showing slain civil rights leader Martin Luther King and hugged her. Just a few minutes later, another officer zip-tied the woman’s arms behind her back and detained her.

“This committee has a unique opportunity to build on some things that the Obama administration did and ask ourselves some hard questions,” Graham said.

Some Obama administration law enforcement reforms aimed at reducing racial discrimination and improving community policing came to a halt after Trump became president in 2017 and his Justice Department took actions such as ceasing investigations into police departments suspected of systemic racial bias.

Civil rights advocates have taken heart over conciliatory approaches displayed in places like Camden, New Jersey, as well as Baltimore, a city torn by violent protests following the 2015 death in police custody of another black man, Freddie Gray.

“I’ve been somewhat encouraged to see that there are some police departments that have demonstrated that police can make the decision to operate in a constitutional fashion and give protesters an opportunity to speak to exercise their First Amendment rights to vent their anger,” Sherrilyn Ifill, president of the NAACP Legal Defense and Educational Fund, told reporters this week, referring to the right of free speech.

Community policing experts said that will be important.

“You have to be transparent and police need to be held accountable when they make mistakes,” said Roberto Villaseñor, the former police chief of Tucson, Arizona, who worked on the 2015 guidelines. “What we need to do is just listen.”

(Reporting by Sarah N. Lynch and Jonathan Allen; Additional reporting by Andrea Shalal in Washington; Editing by Scott Malone and Will Dunham)