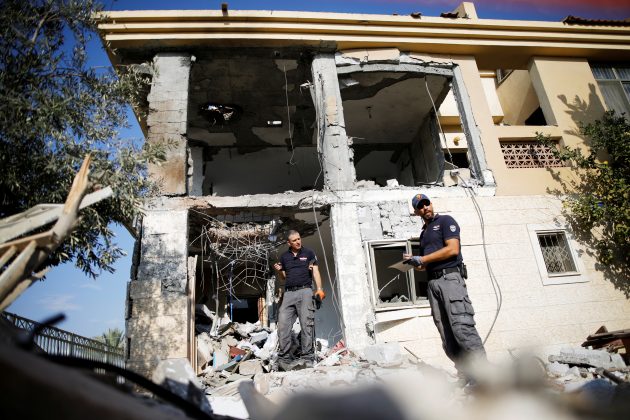 Israeli sappers work on a house that the Israeli military said was hit by a rocket fired from the Gaza Strip, in Beersheba, southern Israel October 17, 2018. REUTERS/Amir Cohen

GAZA (Reuters) – A rocket fired from the Gaza Strip hit a house in the largest city in southern Israel early on Wednesday, prompting Israeli air strikes that killed a militant in the Palestinian enclave.

Egypt, which sent a delegation to Gaza on Tuesday for the latest round of talks on a long-term ceasefire, postponed a visit there by its intelligence chief, Abbas Kamel, following Wednesday’s surge in violence, Palestinian officials said.

The rocket hit a two-story house in Beersheba before dawn, the Israeli military said. It gutted most of the home, blowing out concrete walls and its stone facade, showering its yard and an adjacent street with rubble.

The family living there managed to take shelter in a reinforced room after alert sirens sounded, said officials in the city about 40 km (25 miles) from the Gaza Strip.

Another rocket launched from Gaza and aimed at central Israel fell into the Mediterranean Sea, the military said.

After the attacks, Israeli Prime Minister Benjamin Netanyahu held consultations with his defense minister and top generals at military headquarters near the Gaza border, which has seen more than six months of sometimes violent Palestinian protests.

Netanyahu said that in a statement that unless attacks from Gaza ceased, “Israel will act with great force” to stop them.

With a nod to the Egyptian talks, Gaza’s dominant Hamas Islamists and other major militant groups took the unusual step of denying responsibility for Wednesday’s launchings, saying they rejected “all irresponsible attempts to sabotage the Egyptian effort, including the firing of the rockets”.

There was no immediate claim of responsibility from any of the other smaller groups that operate in Gaza, and by mid-afternoon the area was quiet.

Israeli Regional Cooperation Minister Tzachi Hanegbi told Israel Radio there was evidence to back up the Hamas statement. But he said Israeli policy dictated an “immediate and forceful retaliation” against Hamas because the groups controls Gaza.

The European Union, in a statement from Brussels, said indiscriminate attacks against civilians were completely unacceptable and mortar and rocket fire by Palestinian militants must stop immediately.

Israel’s military said it struck armed training camps in Gaza and also targeted a squad about to launch a rocket.

Health officials in Gaza said a 25-year-old Palestinian man, identified by Al-Mujahedeen Brigades, a small militant faction, as one of its members, was killed. Five other Palestinians were wounded in separate attacks.

Many people in Gaza awoke to the sounds of explosions. Families crowded into a nearby hospital where the dead man’s mother collapsed over his body.

Pillars of smoke rose from the sites bombed by Israel, including a port Hamas is constructing in the southern Gaza Strip and a naval police position.

Cairo has been holding talks with Hamas on a truce with Israel and ways to end 11 years of division with Palestinian President Mahmoud Abbas’s Fatah faction in the occupied West Bank. A Palestinian source said Egyptian officials in Gaza have been in touch with Israel to try to avoid further escalation.

Palestinians have been protesting along the border since March 30, demanding an end to Israel’s blockade of Gaza and the right to return to lands that Palestinians fled or were driven from upon Israel’s founding in 1948.

About 200 Gazans have been killed by Israeli troops since the border protests began, according to Palestinian Health Ministry figures. Palestinians have launched incendiary balloons and kites into Israel and on occasion breached an Israeli frontier fence.

More than 2 million Palestinians are packed into the coastal enclave. Israel withdrew its troops and settlers from Gaza in 2005 but maintains tight control of its land and sea borders. Egypt also restricts movement in and out of Gaza on its border.

In addition to sporadic incidents, Israel and Hamas have fought three wars in the past 10 years. The internationally-mediated peace process aimed at finding a two-state solution to the Israeli-Palestinian conflict is all but moribund.