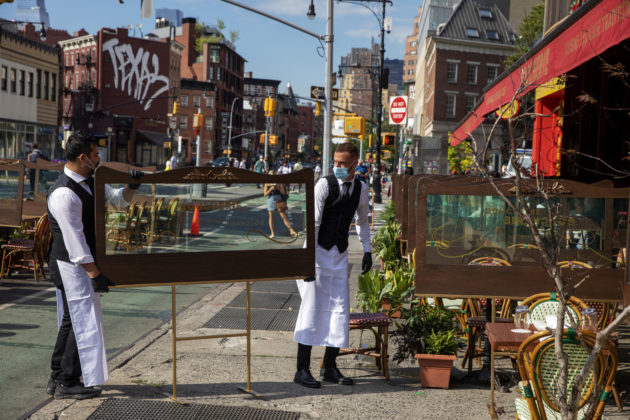 (Reuters) – Insurers are creating products for a world where virus outbreaks could become the new normal after many businesses were left out in the cold during the COVID-19 crisis.

While new pandemic-proof policies might not be cheap, they offer businesses from restaurants to film production companies to e-commerce retailers ways of insuring against disruptions and losses if another virus strikes.

The providers include big insurers and brokers adding new products to existing coverage, as well as niche players that see an opportunity in filling the void left by mainstream firms that categorize virus outbreaks like wars or nuclear explosions.

Tech firm Machine Cover, for example, aims to offer policies next year that would give relief during lockdowns. Using apps and other data sources, the Boston-based company measures traffic levels around businesses such as restaurants, department stores, hairdressers and car dealers.

If traffic drops below a certain level, it pays out, whatever the reason.

“This is the type of coverage which … businesses thought they had paid for when they bought their current business interruption policies before the coronavirus pandemic,” the company’s founder Inder-Jeet Gujral told Reuters.

The company is backed by insurer Hiscox and individual investors, mostly from the insurance and private equity world.

Restaurants in Florida’s Miami-Dade County, where Mayor Carlos Gimenez on Monday ordered dining to shut down soon after reopening, are now reeling, said Andrew Giambarba, a broker for Insurance Office of America in Doral, Florida.

“It’s been like they made it to the ninth round of the fight and were holding on when this punch came out of nowhere,” said Giambarba, whose clients include restaurants that did not get payouts under their business interruption coverage.

“Every niche that is dealing with insurance that is affected by business interruption needs every new product they can have.”

Pandemic exemptions have helped some insurers emerge relatively unscathed and the sector has largely resisted pressure to provide more virus cover. Indeed, some insurers that paid out for event cancellations and other losses have removed pandemics from their coverage.

British risk managers association Airmic said last week that the pandemic had contributed to a lack of adequate insurance at an affordable price and most of its members were looking at other ways to reduce risk.

“These events are completely reliant on the technology working and a failure can be financially crippling,” said Mark Symons, contingency underwriter at Beazley.

Marsh, the world’s biggest insurance broker, has teamed up with AXA XL, part of France’s AXA, and data firm Arity, which is part of Allstate, to help businesses such as U.S. supermarket chains, restaurants and e-commerce retailers cope with the challenges of social distancing.

With home deliveries surging, firms have hired individual drivers to meet demand, but commercial auto liability insurance for “gig” contractors with their own vehicles is hard to find.

Marsh and its partners devised a policy based on usage with a price-by-mile insurance, which can be cheaper than typical commercial auto cover as delivering a pizza doesn’t have the same risks as driving people around.

“Even when the pandemic is over, we believe last-mile delivery will continue to grow,” said Robert Bauer, head of Marsh’s U.S. sharing economy and mobility practice.

A report by consultants Capgemini showed that demand for usage-based insurance has skyrocketed since COVID-19 first broke out and more than 50% of the customers it surveyed wanted it.

However, only half of the insurers interviewed by Capgemini for its World Insurance Report said they offered it.

Since businesses are only now learning how outbreaks can affect them, some new products are effectively custom-made.

Elite Risk Insurance in Newport Beach, California, has been offering “COVID outbreak relapse coverage” since May for businesses forced to shut down a second time, its founder Jeff Kleid said.

The policies are crafted around specific businesses and only pay out when certain conditions are met, Kleid said.

For film and television production companies that could be when a cast member contracts the virus, forcing them to stop shooting. Another client, which raises livestock for restaurants, is covered for a scenario in which it would be impossible to get animal feed.

“The insurance … is costly because it covers a risk that does not have a historical basis for calculating the price,” Kleid says.

And in March, when COVID-19 ravaged northern Italy, Generali’s Europ Assistance offered medical help, financial support and tele-consultations for sufferers when discharged from hospital, on top of regular health insurance.

It sold 1.5 million policies in just two weeks and now has 3 million customers in Europe and United States.

Some insurers are also working on changes to employee compensation and health insurance schemes. With millions of workers not expected to return to offices anytime soon, some large insurers in Asia are preparing coverage to account for that, according to people familiar with those efforts.

At least one Japanese insurer has started work on a product to cover employees for injury while working at home, they said.

“Working from home will be the new normal for years to come. That would make the scope of the employee compensation scheme meaningless if a person suffers an injury while at home,” said a Hong Kong-based senior executive at a European insurer.