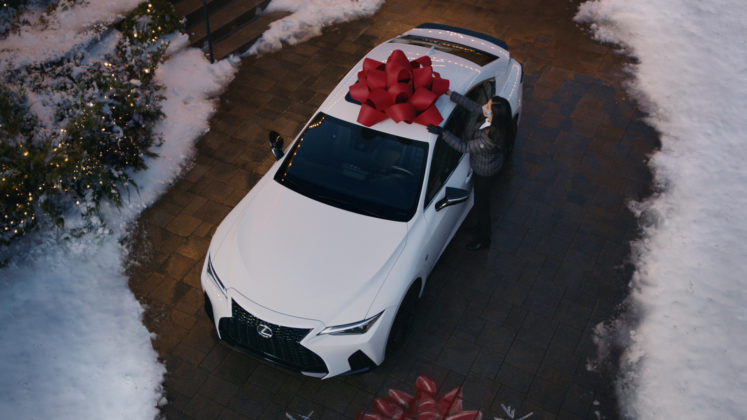 A woman stands next to a Lexus vehicle with a red bow, in this undated handout photo provided by Lexus. LEXUS/Handout via REUTERS.

(Reuters) – After spending the summer convincing consumers to take socially distanced breaks from grim reality, advertisers are now returning to the pandemic as the central focus in holiday shopping campaigns launching this month.

U.S. companies from carmakers to retailers are under pressure to make the shopping season a success after retail sales crashed 21% earlier this year as millions of Americans lost jobs and cut their budgets. They face the challenge of convincing consumers to open their wallets for the holidays even as the coronavirus pandemic rages anew across the United States and Europe.

As new campaigns roll out, brands feel it is their responsibility to inspire optimism for the coming year, but also empathize with “the hurt that people have,” said Jason Schragger, chief creative officer at ad agency Saatchi & Saatchi.

Carmaker Lexus’ iconic “December to Remember” campaign, which features cars wrapped in giant red bows on picturesque snowy driveways, will focus on the different role that driveways have played this year, as people sought ways to celebrate birthdays, anniversaries and other milestones despite stay-at-home orders.

New TV commercials launching on Monday feature family and friends doing a drive-by graduation party in their Lexus vehicles as a student in a cap and gown waves from her driveway. In another, a man greets his children and grandkids from a distance as they drive by, waving a homemade “Happy Birthday, Grandpa” sign.

“We wanted to make sure we weren’t showing large gatherings of people,” said Lisa Materazzo, vice president of marketing at Lexus, owned by Toyota Motor Corp. “But it’s nice to have a live interaction, and that can happen when you’re safe in the car and waving from the driveway.”

Staying connected during the pandemic is the message behind ads for the department store Macy’s, whose window displays and Santa land attraction have been hallmarks of the holidays since the late 19th century.

At a time when flying home or hosting big family gatherings can be dangerous, Macy’s Inc is focusing on how finding and giving the perfect gift plays an even bigger role in connecting with people you can not see in person this year, according to Macy’s chief customer officer Rich Lennox.

A similar theme underpins Etsy’s commercial, in which a woman who longs to see her grandson opens a gift of a handmade doll that matches a picture he had drawn.

“You’re supposed to hug it when you can’t see us,” her grandson said over a video call while holding up the drawing.

Apparel retailer H&M has taken the pandemic-themed ad campaign a step further by changing how commercials are produced in keeping with the times.

The company will lean on influencers working from home to create content, and plans to provide them with outfits and holiday prop kits so they can take festive photos on their own, said Mario Moreno, H&M USA’s head of marketing.

Toy maker Mattel, which has targeted young fans directly on kids’ TV shows, is directing some marketing messages to parents this season.

The owner of the Barbie and Fisher-Price brands will craft digital and social media ads that address the struggle parents have with keeping their kids entertained and engaged after months of schooling from home, said Jason Horowitz, senior vice president of U.S. marketing at Mattel.

The ads will focus on gifts that can offer hours of playtime and mental stimulation while cooped up inside, such as a Thomas & Friends toy that lets kids make-believe that they are taking a trip from their living room, he said.

Expect optimism with a dose of reality at this dark time, ad executives said.

“There’s a lot of 2020 we want to leave behind,” Materazzo said. “But there are nuggets worth celebrating.”