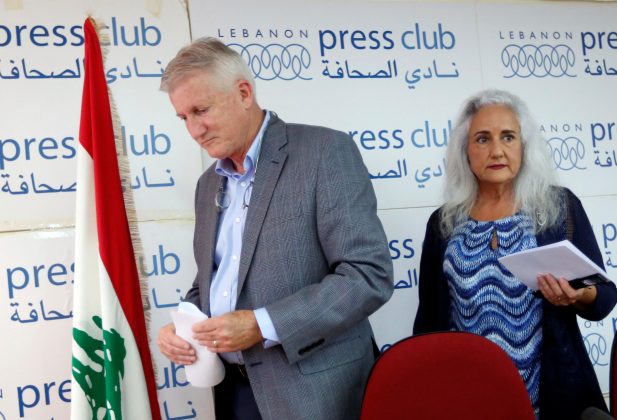 BEIRUT (Reuters) – The parents of an American journalist kidnapped in Syria six years ago appealed on Tuesday for the United States and Syria to work together to find their son and said they had applied for Syrian visas to lobby there for his release.

Austin Tice was 31 years old when he was detained in August 2012 at a checkpoint while reporting in Damascus on the uprising against Syrian President Bashar al-Assad.

He has not been heard from publicly since a video posted online weeks after he disappeared showed him in the custody of armed men, though both Washington and his parents say they believe he is alive.

“We urge both the United States government and the Syrian government to work together to resolve this humanitarian issue,” Marc Tice said at a conference in Beirut.

This is the eighth trip Debra and Marc Tice have made to Beirut in their quest to seek their son’s release and they say they have increased hope that the administration of President Donald Trump could make progress in the case.

“One of the continuous requests we make of the U.S. government is that they make direct contact with their peers in Syria. And that never occurred during Obama administration,” Marc Tice said. “We are very encouraged during this new administration.”

Robert O’Brien, U.S. President Donald Trump’s special envoy for hostage affairs, said in November the United States believes Tice is alive but did not elaborate on his condition.

O’Brien urged Russia, a close ally of Assad, to push for Tice’s release. The Syrian government says it is unaware of Tice’s whereabouts.

Marc and Debra Tice did not comment on who might be holding their son, but said they believed he was in Syria and that the Syrian government was best placed to help find him.

The United States Federal Bureau of Investigation has offered a reward of $1 million for information that leads to Austin’s safe return. Recently, a coalition of media and other organizations in the United States announced plans to match the FBI reward.

“Through these long years we have periodically been told by reliable sources that Austin is alive and is being properly cared for,” Debra Tice said.