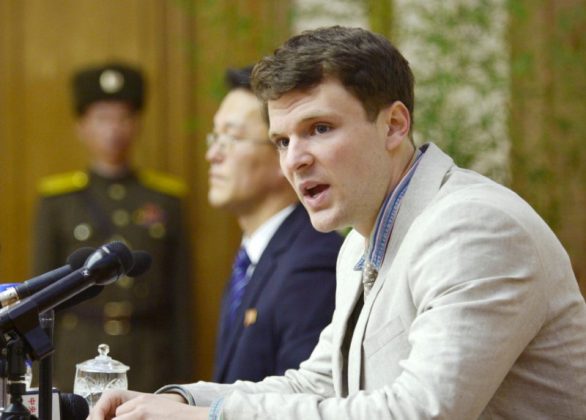 FILE PHOTO - Otto Frederick Warmbier, a University of Virginia student who has been detained in North Korea since early January, attends a news conference in Pyongyang, North Korea, in this photo released by Kyodo February 29, 2016. Mandatory credit REUTERS/Kyodo

CINCINNATI (Reuters) – The parents of an American university student who was detained in North Korea are expected on Thursday to detail his mistreatment during 17 months in prison when he fell into a coma.

Otto Warmbier’s parents, Fred and Cindy, are scheduled to speak to the media at their son’s former high school in the Cincinnati suburb of Wyoming, Ohio.

Warmbier, 22, was “brutalized and terrorized” by the North Korean regime, his parents said in a statement released Tuesday before he arrived in the United States on a medevac flight.

Warmbier is receiving treatment at the University of Cincinnati Medical Center, but details of his condition have not been released.

Warmbier, a University of Virginia student, was sentenced in March 2016 to 15 years of hard labor for trying to steal an item with a propaganda slogan, according to North Korean media.

Warmbier’s family said they were told by North Korean officials, through contacts with American envoys, that Warmbier fell ill from botulism some time after his trial and lapsed into a coma after taking a sleeping pill, the Washington Post reported.

The New York Times quoted a senior U.S. official as saying Washington received intelligence reports that Warmbier had been repeatedly beaten in custody.

The State Department is continuing to discuss three other detained Americans with North Korea.

Tensions between the United States and North Korea have been heightened by dozens of North Korean missile launches and two nuclear bomb tests since the beginning of last year. Pyongyang has also vowed to develop a nuclear-tipped intercontinental ballistic missile capable of hitting the U.S. mainland.

(Reporting by Timothy Mclaughlin in Chicago; Editing by Cynthia Osterman)