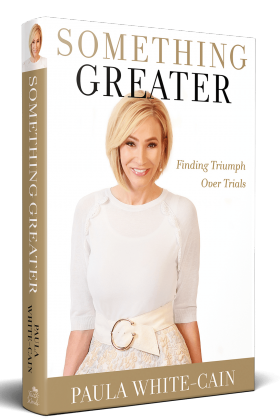 As a celebrated author and teacher, popular TV personality, and spirit-led preacher of God’s Word, Paula White Cain has impacted people from every walk of life in more than 100 countries. Pastor White-Cain has been the spiritual advisor to President Trump for many years and delivered the invocation at President Trump’s inauguration, becoming the first female clergy member to pray at a Presidential inauguration.

Jim and Lori Bakker are thrilled to welcome Paula to the stage to share her incredible testimony and promote her new book, “Something Greater.”

Early in Paula’s life, she didn’t know God, but there was always a pull to something greater. Once she prayed for salvation at the age of eighteen, Paula finally understood the meaning of grace and purpose and realized God had been taking care of her the whole time.

Paula shares her journey of faith in SOMETHING GREATER, what she calls “a love letter to God from a messed up Mississippi girl.” She details feeling led to a higher calling as a child, how she came to serve others as a female pastor, and what led to being asked to become spiritual advisor to President Donald Trump.

SOMETHING GREATER will encourage readers to know and understand the “something greater” that is in all of them and will teach them how to cling to Jesus Christ in times of need and abundance.

We hope you will join us here at Morningside as this powerful woman of God, Paula White Cain graces our stage with timely, divine words about our lives and our nation!

Don’t forget!  Taping begins at 11 am on Tuesday, October 10th on Grace Street at Morningside! Admission is free! And an added bonus, Paula is bringing along some copies of  “Something Greater” to have available to the studio audience during taping! Don’t miss it!