A crisis is God’s way to make us do stuff that we don’t want to do. 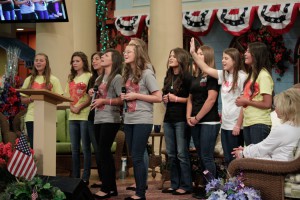 The evening opened with a surprise when Lori Bakker came out with Philip Cameron to make the formal introduction. Lori shared her passion for the world of Philip and Stella’s Voice, saying there is “not a greater ministry in my personal opinion on the face of the Earth.”

Philip introduced the girls from Stella’s House who came with him to Morningside and shared the reason he brings the girls with him to speak to groups like those attending the Fourth of July celebration.

“We want to make them so real to you that they become like your daughters,” Cameron said. 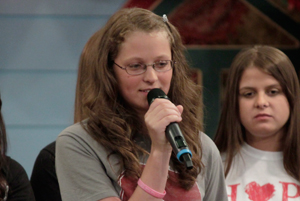 The girls introduced themselves and gave a bit of their backgrounds. A young woman named Silvia stepped forward to share her testimony. She talked about living in the orphanages in Moldova. The ways that groups of kids would beat the other kids to take the meager possessions they would bring to the orphanage. Then she shared how she came to Stella’s House and the power of Christ in her life.

“He’s healing my heart every day little by little,” Silvia said as she wrapped up her story.

Philip Cameron then took to the podium and spoke about the challenges that he faced in ministry from his early days with his father to the building and upkeep of Stella’s House. He shared with the crowd that he discovered something huge in those times of struggle.

“A crisis is God’s way to make us do stuff that we don’t want to do,” Cameron shared. “Out of a crisis comes a creativity that you can never see coming.”

He told the crowd that in the crisis they’ve been facing building two new Stella’s House buildings they’ve seen God had bigger plans. The kids started their own church that has lead 190 of their peers to Christ in the last year. Now they’re building a church between the two Stella’s Houses that will also have a hotel for visiting evangelists and workers.

He ended the evening with a challenge to everyone both in person and watching the online live stream at jimbakkershow.com to give to Lori’s House because of the challenges that Lori’s House has faced is similar to the ones that he’s faced building Stella’s House.