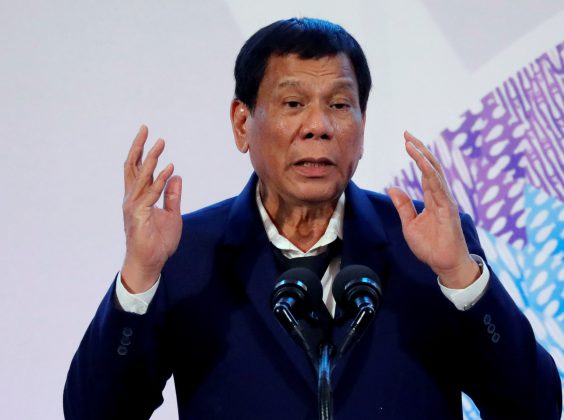 MANILA (Reuters) – Philippine President Rodrigo Duterte on Tuesday threatened to shut down any mine that supports Maoist rebels waging a protracted guerrilla war to overthrow the government.

The Philippines has been in on-again, off-again peace talks with the National Democratic Front (NDF), the political arm of the communist movement, since 1986 to end a rebellion that has killed more than 40,000 people and stunted growth in resource-rich rural areas.

In a speech honoring soldiers who fought pro-Islamic State militants for five months in the southern city of Marawi, Duterte said that attacks from the Maoist rebels had been on the rise, forcing him to end negotiations, and that he would declare the guerrilla group a terrorist organization.

“If I go against the communists, then everybody has to reconfigure their relationship with the New People’s Army,” he said, referring to the communists’ armed wing. “If you support them financially, I will close you down.”

Duterte said some mines were paying “revolutionary taxes” to the rebels in exchange for allowing their operations in remote areas to continue. He did not name any companies.

Mines in the Philippines, many with foreign partners, are digging for gold, nickel, copper, chromite and coal. The Mines and Geosciences Bureau said the country had estimated $840 billion worth of untapped mineral wealth as of 2012.

The rebels are also engaged in small-scale mining, like gold panning in the south.

Mining companies shared the president’s position, Ronald Recidoro, executive director at the Chamber of Mines of the Philippines, said.

“We do not condone any member supporting the New People’s Army through the payment of revolutionary taxes,” Recidoro told Reuters.

“This is clearly against the law and they really should be prosecuted if they are found to be supporting these organizations. And if closure is warranted, that is within the prerogative of the president.”

The Chamber of Mines groups 20 of the country’s 43 operating mines. Recidoro said some mining firm members had experienced some of their equipment being burned by the NPA because of their refusal to pay the taxes.

“I am fighting a rebellion… I have to build a strong army,” Duterte said, adding the military would next year acquire 23 attack helicopters to boost counter-insurgency capability.

Military spokesman Major-General Restituto Padilla said the Philippines already had approval for the purchase of attack helicopters but had not decided what type or where to source them.