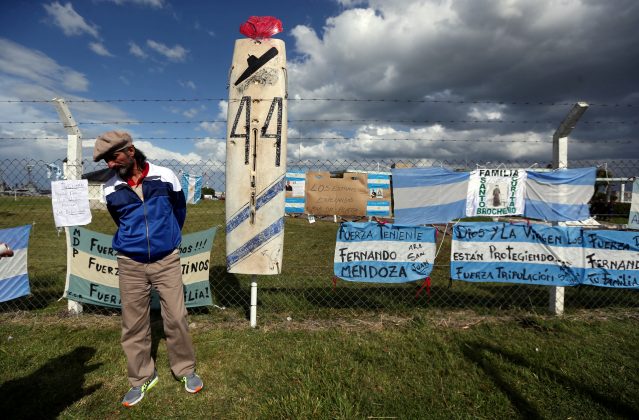 A man stands in front of signs in support of the 44 crew members of the ARA San Juan submarine missing at sea, placed on a fence outside the Argentine Naval Base where the submarine sailed from, in Mar del Plata, Argentina November 20, 2017. REUTERS/Marcos Brindicci

MAR DEL PLATA, Argentina (Reuters) – The search continued on Tuesday for an Argentine submarine with 44 crew aboard, missing in the South Atlantic for nearly a week, with improved weather expected to quicken the hunt for the vessel.

Meteorologists expected waves of about 2 meters (6.6 ft) in the search area for the ARA San Juan, down from 8 meters over the weekend. Rescue boats have scoured about 80 percent of the search area, but storms and high winds have limited the effort in the past several days.

“Today is a critical day,” said Maria Victoria Morales, the mother of Luis Garcia, an electrical technician aboard the vessel. “We are holding up as well as we can.”

Morales and other relatives of crew members have been gathered at a naval base in Mar del Plata, where authorities are coordinating the search and rescue operation.

The submarine was en route from Ushuaia in Argentina’s extreme south to the coastal city of Mar del Plata when it sent its last location on Nov. 15.

More than a dozen boats and planes from Argentina, the United States, Britain, Chile and Brazil have joined the search. Authorities have mainly been scanning from the sky as storms have halted the maritime hunt.

“We trust that the boats assigned to each zone can do an effective maritime patrol, and will not be struggling against the storm as they were in recent days,” Navy spokesman Enrique Balbi said on Monday night.

Searchers have suffered disappointments in recent days as analyses have shown that satellite signals and sounds detected by underwater probes initially thought to be messages from the crew did not come from the vessel.

The submarine had reported an electrical problem and was heading back to its base in Mar del Plata when it disappeared on Wednesday nearly 300 miles off the coast.

The U.S. Navy was preparing on Tuesday to deploy rescue equipment, including a remote-operated vehicle.

The ARA San Juan was inaugurated in 1983, the newest of three submarines in the Navy’s fleet. Built in Germany, it underwent maintenance in 2008 in Argentina.

The maintenance included the replacement of its four diesel engines and its electric propeller engines, according to specialist publication Jane’s Sentinel.

(This version of the story corrects Balbi statement to Monday night, not Sunday night in paragraph seven)