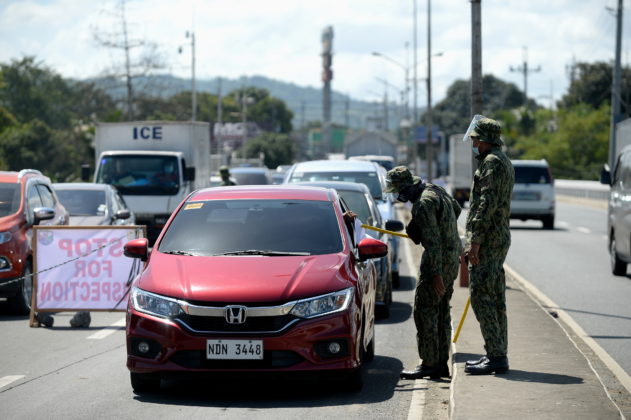 MANILA (Reuters) – The Philippines passed the 10,000 mark for new daily coronavirus infections for the first time on Monday and put its capital region back on one of its toughest levels of lockdown, to try to tackle a spike in cases that is testing its healthcare capacity.

Manila and surrounding provinces were put back under enhanced community quarantine (ECQ), the highest tier in its containment protocols, for the first time since May 2020 to try to quell the surge in cases, despite inroads late last year towards controlling its epidemic.

Health experts say the surge in infections underscores the need to expedite a national vaccination drive, with only 656,331 healthcare workers so far given their first of two shots. The government aims to inoculate 70 million people this year.

It has also struggled to secure vaccine supplies, with an inventory of 2.525 million doses, mostly of Sinovac Biotech’s vaccine, one million of which arrived on Monday.

“Whatever the cost, whatever the volume they want to bring in, it’s fine with me,” Duterte said in a national address.

Prior to Duterte’s approval, businesses go through the government for supply deals. Previously, half of the purchased doses were required to be given to the government.

Health authorities blame the spike on poor public compliance with prevention measures and the presence of new and more transmissible coronavirus variants in the capital region, which accounts for about a third of economic activity.

“This surge is really challenging while ECQ is painful, particularly for the economic sector,” said Benjamin Co, an infectious disease expert with three Manila hospitals.

The Philippines was the first country in Asia to go under a nationwide lockdown and broad restrictions and movement curbs saw its economy slump 9.5% last year, its worst economic contraction on record.

“I can give you beds, I can give you rooms. The problem is I cannot give you additional manpower capacity, like nurses and doctors to take care of you,” Co added.