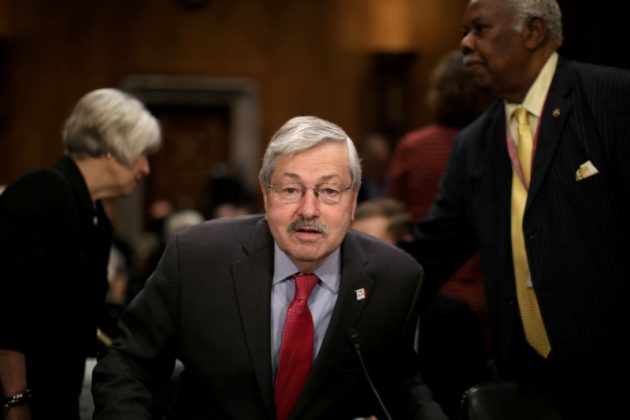 FILE PHOTO - Iowa Governor Terry Branstad arrives to testify before a Senate Foreign Relations Committee confirmation hearing on his nomination to be U.S. ambassador to China at Capitol Hill in Washington D.C., U.S. on May 2, 2017. REUTERS/Carlos Barria/File Photo

(Reuters) – Planned Parenthood said on Thursday it would shutter four of its 12 clinics in Iowa as a result of a measure backed by Republican Governor Terry Branstad that blocks public money for family planning services to abortion providers.

Health centers in Burlington, Keokuk and Sioux City will close on June 30 and one in Quad Cities soon after as a result of losing $2 million in funds under the new measure, said Susan Allen, a spokeswoman for Planned Parenthood of the Heartland. The four clinics served 14,676 patients in the last three years, she said, including many rural and poor women.

“It will be devastating,” Allen said.

The closures marked the latest fallout from a continuing push by Republicans, including President Donald Trump, to yank funding from Planned Parenthood. Many have long opposed the organization, some on religious grounds, because its healthcare services include abortions, although it receives no federal funding for abortions, as stipulated by federal law.

The Republican-controlled U.S. House of Representatives included such a defunding measure as part of the American Health Care Act, the bill aimed at replacing Obamacare.

Iowa’s Republican-led legislature agreed in its recent budget to discontinue a federal Medicaid family planning program and replace it with a state program that bars funding to organizations that provide abortions or maintain facilities where abortions are carried out. The move cost the state about $3 million.

Texas in 2011 made a similar move that has reduced funding. A state report in 2015 found that nearly 30,000 fewer women received birth control, cancer screenings and other care as a result.

A coalition of 35 Iowa groups that oppose abortion have previously argued that funding for family planning indirectly subsidizes abortions.

“The pro-life movement is making tremendous strides in changing the hearts and minds, to return to a culture that once again respects human life,” said Ben Hammes, a spokesman for Branstad, who said there were 2,400 doctors, nurses and clinics around the state for family planning that do not provide abortions.

Planned Parenthood of the Heartland said it will continue to operate eight clinics in Iowa. They provide services including cancer screenings, birth control, STD testing and annual checkups.

The group said in a tweet on Thursday that politicians driven more by personal beliefs than facts were hurting access to women’s health care.

“The devastation in Iowa is a sign of what could be next for the rest of the nation,” Danielle Wells, an official at Planned Parenthood Federation of America, said in an email.