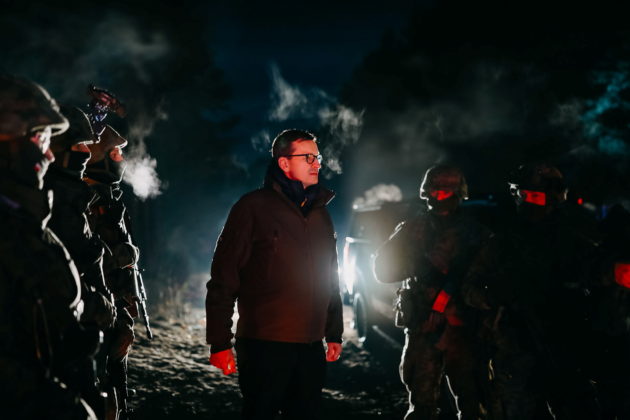 Poland's Prime Minister Mateusz Morawiecki meets with service members near the Polish-Belarusian border outside the town of Krynki, Poland, in this image released by the Polish Prime Minister's Office on November 22, 2021. Adam Guz/KPRM/Handout via REUTERS

By Anna Wlodarczak-Semczuk and Andrius Sytas

WARSAW/VILNIUS (Reuters) -Polish Prime Minister Mateusz Morawiecki warned on Sunday that the migrant crisis on the Belarus border may be a prelude to “something much worse,” and Poland’s border guard said Belarusian forces were still ferrying migrants to the frontier.

The European Union accuses Belarus of flying in thousands of people from the Middle East and pushing them to cross into EU and NATO members Poland, Lithuania and Latvia, in response to European sanctions.

Minsk, which denies fomenting the crisis, cleared a migrant camp near the border on Thursday and started to repatriate some people to Iraq, while Poland and Lithuania reported lower numbers of attempts to cross their borders in recent days.

But Morawiecki warned the crisis was far from over as he toured Estonia, Lithuania and Latvia on Sunday to discuss the situation.

A poll published by Poland’s Rzeczpospolita daily on Sunday said 55% of Poles are worried the crisis on the border could escalate into an armed conflict.

“I think that the things that unfold before our eyes, these dramatic events, may only be a prelude to something much worse,” Morawiecki said in Vilnius.

He pointed to increased Russian military presence close to Ukraine, as well as in Belarus and Russia’s Kaliningrad enclave which borders Poland and Lithuania, as “an instrument which could be used directly for a direct attack”.

The situation in Afghanistan after the Taliban takeover “may be used as the next stage of the migration crisis,” said Morawiecki.

“For us, it is very important that any talks (with Belarus) are coordinated with Lithuania, Poland and Latvia, which are at the forefront of the hybrid attack, and no decisions are taken which do not solve the situation fundamentally”, she said after meeting with Morawiecki on Sunday.

France’s foreign minister said on Sunday that Russia had to exert pressure on its ally, Belarus, to end the migrant crisis.

Poland says Minsk continues to truck hundreds of foreigners to the frontier, where about 10 migrants are believed to have died with a frigid winter setting in.

“On Saturday … a group of about 100 very aggressive foreigners, brought to the border by Belarusian servicemen, tried to enter Poland by force,” the border guard said on Twitter on Sunday.

A dozen migrants from Iraq, speaking with Lithuanian news portal DELFI over the border with Belarus on Saturday, said they were forcibly brought there in military trucks by Belarus officials, who ignored their wish to go back to Iraq.

Hundreds of Poles took part in protests on Saturday to demand help for the migrants. The Catholic church organized a fundraiser on Sunday to collect money for those in need at the border and support the integration of refugees who will stay in Poland.

(Reporting by Anna Wlodarczak-Semczuk in Warsaw and Andrius Sytas in Vilnius; Editing by Kirsten Donovan and Raissa Kasolowsky)