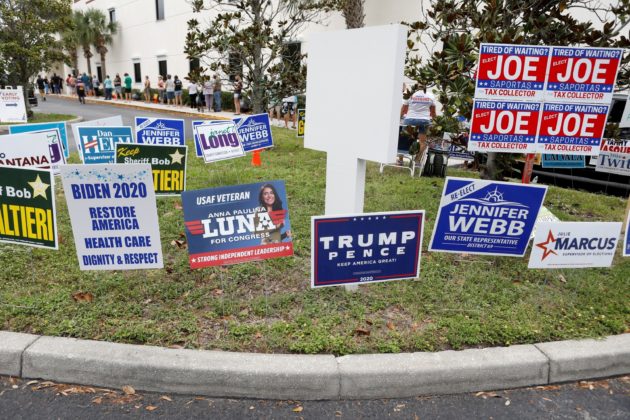 FILE PHOTO: Campaign signs are posted near the Supervisor of Elections Office polling station while people line up for early voting in Pinellas County ahead of the election in Largo, Florida. U.S. October 21, 2020. REUTERS/Octavio Jones/File Photo

WILMINGTON, Del (Reuters) – U.S. Election Day on Tuesday has all the ingredients for a drawn-out court battle over its outcome: a highly polarized electorate, a record number of mail-in ballots and some Supreme Court justices who appear ready to step in if there is a closely contested presidential race.

The only missing element that would send both sides to the courthouse would be a razor-thin result in a battleground state.

“If it comes down to Pennsylvania and Florida I think we’ll be in the legal fight of our lives,” said Jessica Levinson, who teaches election law at Loyola Law School in Los Angeles.

Election disputes are not unusual but they are generally confined to local or statewide races, say election law experts.

This year, in the months leading up to the Nov. 3 showdown between Republican President Donald Trump and his Democratic challenger Joe Biden, the coronavirus pandemic fueled hundreds of legal challenges over everything from witness signatures, U.S. mail postmarks and the use of drop boxes for ballots.

“As soon as the election is over,” Trump told reporters on Sunday, “we’re going in with our lawyers.”

Two court rulings on deadlines for counting mail-in ballots have increased the likelihood of post-election court battles in the event of close outcomes in Pennsylvania and another crucial state, Minnesota, the experts said.

The 8th U.S. Circuit Court of Appeals ruled on Oct. 29 that Minnesota’s plan to extend the deadline for counting mail-in ballots was an unconstitutional maneuver by Minnesota Secretary of State Steve Simon, a Democrat.

Simon has said officials will not appeal to the U.S. Supreme Court, but further litigation in the lower courts will determine whether those ballots will be counted.

Meanwhile, on Oct. 28, the U.S. Supreme Court let stand a ruling by Pennsylvania’s top court that allowed officials to count mail-in ballots that are postmarked by Election Day and received up to three days later.

The justices said there was not enough time to review the state court ruling. As in Minnesota, Pennsylvania officials will segregate those ballots, teeing up a potential court battle in the event of a close election.

If any post-election battles are heard by the Supreme Court, it will have a 6-3 conservative majority after Trump-appointed Amy Coney Barrett was confirmed on Oct. 26. Three of the justices were appointed by Trump.

The president said in September that he wanted his nominee confirmed because the election “will end up in the Supreme Court and I think it’s very important that we have nine justices.”

Election law specialists said the likelihood of the Supreme Court deciding the next president would require an outcome amounting to a tie in a state that would tip the election to one candidate or the other.

“Some of the president’s statements suggest he thinks the Supreme Court would simply be asked to decide who won the election,” said Adav Noti, senior director of trial litigation at Campaign Legal Center. “That’s not how election litigation works.”

Only one presidential election has been decided in the courts in the past 140 years. In 2000, Republican George W. Bush defeated Al Gore, a Democrat, who conceded after losing a decision at the U.S. Supreme Court over a recount in Florida.

Elections are governed by state laws and disputes generally play out in state courts where campaigns fight over recounts and the validity of voter registrations.

But in recent decisions, a minority of conservative Supreme Court justices appear to be setting the stage to aggressively review state courts when they are interpreting their own state’s constitutional voting protections.

On Oct. 26, the court kept in place Wisconsin’s policy requiring mail-in ballots to arrive by Election Day. Conservative Justice Brett Kavanaugh, a Trump appointee, wrote in an opinion accompanying the court’s action that “under the U.S. Constitution, the state courts do not have a blank check to rewrite state election laws for federal elections.”

Some scholars said the recent language could encourage campaigns to take an election challenge to the Supreme Court.

“It’s an invitation to challenge anything done to administer an election in a state that isn’t jot or tittle with what the legislature said to do,” Joshua Geltzer, executive director of Georgetown Law’s Institute for Constitutional Advocacy & Protection. “And that’s virtually everything.”