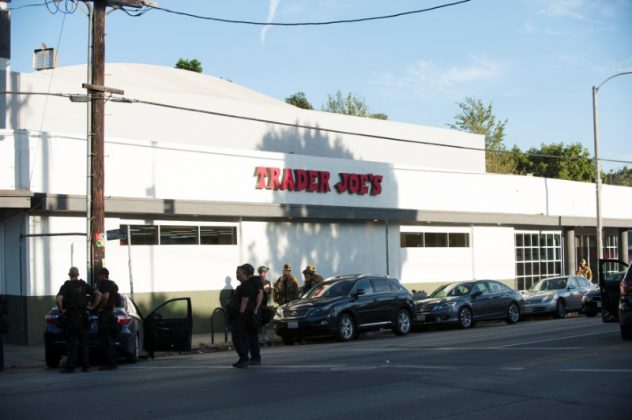 (Reuters) – Los Angeles police named a 28-year-old man on Sunday as the suspect who took hostages and barricaded himself for three hours inside a Trader Joe’s grocery store in which he fatally shot a woman. 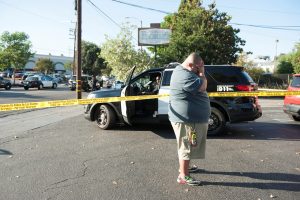 A Trader Joe’s employee waits in a parking lot near a Trader Joe’s store where a hostage situation unfolded in Los Angeles, California, July 21, 2018. REUTERS/Andrew Cullen

Atkins is likely to appear in court to be formally charged early this coming week, Madison added.

Atkins is suspected of repeatedly having shot his grandmother and another woman in a separate part of the city before being chased by police and crashing his car outside the Trader Joe’s, according to the police account. He exchanged gunfire with police and entered the crowded store, police said.

Some people managed to escape the store by climbing through a window down a rope ladder, according to video footage. The stand-off came to an end after the gunman, who at one point was shot in the arm, talked with police over the phone to negotiate a surrender before emerging.

The woman killed at the store was identified as Melyda Corado by relatives, who said she worked there as a manager.

Trader Joe’s called the attack the “saddest day in Trader Joe’s history” in a statement on its website, saying the store would remain closed indefinitely.

“Our thoughts are with her family, and our Crew Members and customers who experienced this terrifying and unimaginable ordeal,” the statement said.

Atkin’s grandmother was left in critical condition in the earlier attack on Saturday, police said. There was no update on her condition on Sunday, they said.