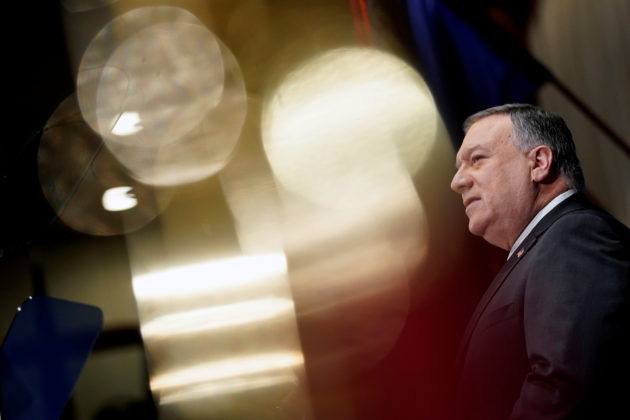 By Humeyra Pamuk and Matt Spetalnick

WASHINGTON (Reuters) – U.S. Secretary of State Mike Pompeo said on Tuesday, without providing hard evidence, that al Qaeda had established a new home base in Iran and the United States had fewer options in dealing with the group now it was “burrowed inside” that country.

Pompeo alleged that Iran has given safe haven to al Qaeda leaders and support for the group, despite some skepticism within the intelligence community and Congress.

The New York Times reported in November that al Qaeda’s Abu Muhammad al-Masri, accused of helping to mastermind the 1998 bombings of two U.S. embassies in Africa, was gunned down by Israeli operatives in Iran. Iran denied the report, saying there were no al Qaeda “terrorists” on its soil.

Pompeo told a news conference at the National Press Club in Washington that he was announcing publicly for the first time that al-Masri died on Aug. 7 last year.

Pompeo said his presence in Iran was no surprise, and added:

“Al-Masri’s presence inside Iran points to the reason that we’re here today … Al-Qaeda has a new home base: it is the Islamic Republic of Iran.”

Iran has been a target throughout the Trump administration and Pompeo has sought to further ratchet up pressure on Iran in recent weeks with more sanctions and heated rhetoric.

Pompeo added that he was imposing sanctions on Iran-based al-Qaeda leaders and three leaders of al-Qaeda Kurdish battalions.

He also announced a reward of up to $7 million under for information leading to location or identification of Iran based al Qaeda leader Muhammad Abbatay — also known as Abd al-Rahman al-Maghrebi.

Earlier accusations by the George W. Bush administration of Iranian links to al Qaeda’s Sept. 11, 2001, attacks on the United States have been discredited. But reports have surfaced over the years of al Qaeda operatives hiding out in Iran.

A former senior U.S. intelligence official with direct knowledge of the issue said the Iranians were never friendly with al Qaeda before or after the Sept. 11 attacks and any claims of current cooperation should be viewed warily.