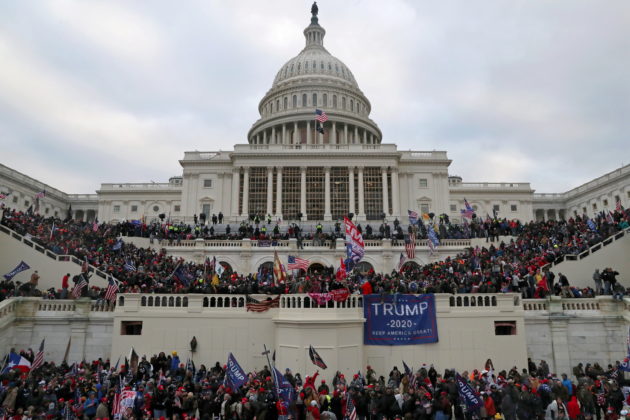 By Richard Cowan and Andrea Shalal

WASHINGTON (Reuters) – The Democratic-led House of Representatives plans to vote as soon as Wednesday on an article of impeachment charging Trump with inciting an insurrection unless he resigns or Vice President Mike Pence moves to oust him under a provision in the U.S. Constitution.

“This impeachment is causing tremendous anger,” Trump told reporters as he left the White House for a trip to the U.S.-Mexico border wall near Alamo, Texas. He also defended the remarks he made last week to a rally of his supporters immediately before some of them stormed the Capitol, saying, “I want no violence.”

The Republican president, however, did not answer a reporter’s question about whether he would resign.

The House will vote later on Tuesday on a resolution calling on Pence, a Republican, to invoke the 25th Amendment, a never-before used law that allows a majority of the Cabinet to strip the president of power if he or she is unable to discharge the office’s duties.

Pence advisers say he is opposed to the idea.

If Trump has not stepped down and Pence has not taken action by Wednesday, Democratic leaders plan to bring impeachment to the House floor.

Meanwhile, U.S. Representative Tom Reed, a moderate Republican, wrote in a New York Times op-ed that he and House colleagues would introduce a censure resolution against Trump on Tuesday as an alternative to a “rushed, divisive” impeachment.

But House Speaker Nancy Pelosi, the top congressional Democrat, told Democratic members on a conference call on Monday that a censure “would be an abdication of our responsibility,” according to a source familiar with the call.

Democratic lawmakers introduced one article of impeachment on Monday, accusing Trump of inciting a violent insurrection with a fiery speech exhorting thousands of followers to march on Congress as it worked to certify President-elect Joe Biden’s Nov. 3 election victory.

“The president’s threat to America is urgent, and so too will be our action,” Pelosi said.

Chances the Democratic drive will result in his removal appear remote.

Impeachment would trigger a trial in the Republican-controlled Senate, which is in recess and not scheduled to return to Washington until Jan. 19.