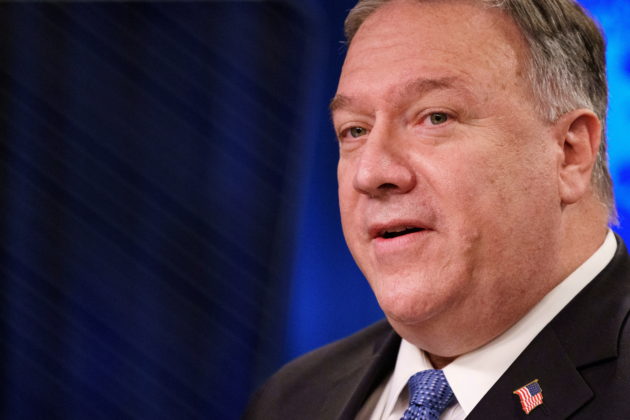 U.S. Secretary of State Mike Pompeo takes part in a briefing to the media at the State Department in Washington, U.S., November 10, 2020. Jacquelyn Martin/Pool via REUTERS

WASHINGTON (Reuters) – U.S. Secretary of State Mike Pompeo on Tuesday voiced confidence that once every “legal” vote was counted, it would lead to a “second Trump administration,” appearing to reject Democratic challenger Joe Biden’s victory over President Donald Trump.

He spoke as world leaders, including Washington’s close allies Britain and France, already have congratulated President-elect Biden. Trump, a Republican, has so far refused to concede and made baseless claims that fraud was marring the results.

“There will be a smooth transition to a second Trump administration,” Pompeo told a State Department news conference. He later sought to assure the world that America’s post-election transition would be successful.

“We’re going to count all the votes … The world should have every confidence that the transition necessary to make sure that the State Department is … successful today and successful when the president who’s in office on January 20, a minute after noon, will also be successful.”

Biden, due to take office on Jan. 20, 2021, risks a delayed transition as Trump has vowed to push ahead with longshot legal challenges to his election loss. Republican U.S. lawmakers have defended his right to do so.

Asked if Trump’s refusal to concede hampers State Department efforts to promote free and fair elections abroad, Pompeo, a close ally and appointee of Trump’s, said: “This department cares deeply to make sure that elections around the world are safe and secure and free and fair.”

The leading Republican in Congress, Senate Majority Leader Mitch McConnell, has carefully backed Trump, saying that he was “100% within his rights to look into allegations of irregularities,” without citing any evidence.

And U.S. Attorney General William Barr, a Trump appointee who heads the Justice Department, on Monday told federal prosecutors to “pursue substantial allegations” of irregularities of voting and the counting of ballots.

In his first official travel after the Nov. 3 election, Pompeo is due to travel to France, Turkey, Georgia, Israel, Qatar, United Arab Emirates and Saudi Arabia between Nov. 13-23. The leaders of some of those countries have already congratulated Biden.