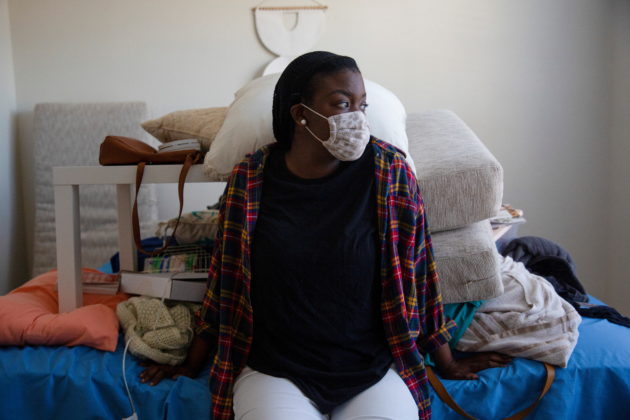 Melissa Wilson sits inside her apartment, which is in repair after a flooding occurred due to a burst pipe caused by winter weather in the unit above hers, in Fort Worth, Texas, U.S. February 24, 2021. REUTERS/Shelby Tauber

(Reuters) – Cleopatra Mancha had already lost her job in the pandemic. Then the winter storm came to her home state of Texas.

“We had all the pipes bust in our house. It wasn’t just one area – it was everywhere. In the bathrooms, our sinks, where our washer and dryer are,” she said. “So we’re not having to just try to pay just our electric bill – we have to pay for all these repairs, too.”

The 44-year-old mother of two in Arlington, Texas, choked back sobs.

Energy insecurity among poor and middle-class Americans had already deepened because of the economic crisis the pandemic created, according to experts. Even before the pandemic, low-income households in Texas were spending 10% of their income on energy – compared with 2% for the better off.

Energy-burdened poorer Texans have been forced to buy less food to keep the lights on one month, or put off purchasing clothes another month to keep the heat going.

In Texas last week, 4 million people were without power for days and half saw water services disrupted. Across the United States, experts say, households will suffer unless energy policies are reworked, grid infrastructure improved and deep investments made to fix the 30 million housing units that have serious physical or health hazards, over one-fifth of the nation’s total.

Dana Harmon is the executive director of the Texas Energy Poverty Research Institute, which has been tracking increasingly unaffordable electric bills in lower-income communities and in neighborhoods of color. The pandemic has forced people out of work and at home for increasingly long periods – including children learning at a distance. That has increased demand for household energy consumption.

“Now when you put a storm on top of that,” Harmon said, “you see people facing real danger.”

There has been much attention cast on energy bills exceeding $10,000 for some Texas customers subject to variable energy market prices. Harmon said those customers only make up about 0.2% of all consumers in the competitive electricity market. She is more concerned about the 3.5 million low-income households across Texas that have already been paying a disproportionate chunk of their income for energy and likely face higher bills as fuel costs have risen for utility companies.

Harmon said a saving grace from the widespread blackouts might be that leaders in Austin who are making decisions on planning for energy systems, along with industry leaders in Houston and elsewhere, “keenly experienced what it’s like to go without energy during a crisis, and I hope we would see more empathy for what energy insecurity feels like.”

Other advocacy groups like the Southwest Workers Union in San Antonio say landlords are finding loopholes to evict tenants behind on rent and a wider moratorium on evictions is needed.

Michelle Romero – national director for Dream Corps, an environmental, technology and social justice group – said that the grid in Texas and across the United States needs to be modernized to increase energy security.

A study released by Dream Corps on Wednesday found 30 million homes across the United States have serious physical or health hazards, from asbestos to structural damages, making it impossible for many to properly heat or cool their homes. The damage can also disqualify the homes from obtaining federal aid in the first place.

Romero said that just as the pandemic has allowed a wider public to see the intersections between race and health care disparities, she thinks the events like the Texas freeze are driving home the realities about who bears the brunt of extreme weather events.

“Who is impacted first and worst by events like we saw in Texas is absolutely an issue of income inequality and racial injustice,” she said.