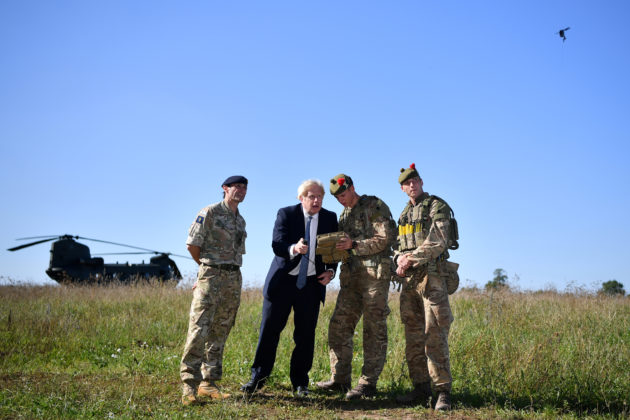 By Andrew MacAskill and William James

LONDON (Reuters) – Britain announced its biggest military spending increase since the Cold War on Thursday, pledging to end the “era of retreat” as it seeks a post-Brexit role in a world Prime Minister Boris Johnson warned was more perilous than for decades.

Johnson said the extra spending reflected the need to upgrade military capabilities even as the COVID-19 pandemic pummels the economy and strains public finances. He outlined plans for a new space command, an artificial intelligence agency and said the navy would be restored as Europe’s most powerful.

Outlining the first conclusions from a big review of foreign policy and defense, he announced an extra 16.5 billion pounds ($22 billion) for the military over the next four years. The defense budget is now just under 42 billion pounds a year.

“The era of cutting our defense budget must end, and it ends now,” Johnson told parliament by video link from his Downing Street office, where he is isolating after contact with someone who tested positive for COVID-19.

“I have done this in the teeth of the pandemic, amid every other demand on our resources, because the defense of the realm and the safety of the British people must come first.”

Britain was the main battlefield ally of the United States in Iraq and Afghanistan and, alongside France, the principal military power in the European Union. But its 2016 vote to leave the EU has made its global role uncertain at a time when China is rising and President Donald Trump has cast doubt on U.S. support for traditional allies.

“The UK is our most stalwart and capable ally, and this increase in spending is indicative of their commitment to NATO and our shared security,” he said. “With this increase, the UK military will continue to be one of the finest fighting forces in the world.”

The government said the increase will cement Britain’s position as the largest defense spender in Europe and second-largest in NATO.

A national cyber force will be established alongside the new space command, which will be capable of launching its first rocket by 2022. These and other new projects will create up to 10,000 jobs, the government said.

Britain’s main opposition Labor Party said the increase was long overdue after the ruling Conservative government cut the size of the armed forces by a quarter in the last decade.

The extra funding will raise further concerns about how the government manages its defense and security budget after repeated accusations it allowed costs to spiral for overly-ambitious projects.

A report by lawmakers said on Thursday that Britain’s GCHQ spying agency ignored evidence and broke its budget in choosing an expensive central London headquarters for a newly-created cyber-security center.

After media reports that billions of pounds could be cut from Britain’s foreign aid budget, Defense Secretary Ben Wallace told Sky News that higher defense spending would not come at the expense of aid.