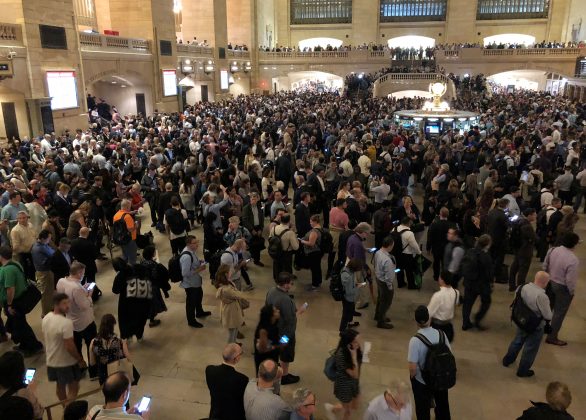 Commuters wait as service was temporarily suspended on all Metro North lines at Grand Central Terminal due to storms in Manhattan, New York, May 15, 2018. REUTERS/Herbert Lash

NEW YORK (Reuters) – A violent spring storm that killed at least five people in the northeastern United States downed trees and power lines, leaving hundreds of thousands of people without power on Wednesday.

By daybreak, more than 370,000 residents were without power in New York, New Jersey, Connecticut and Pennsylvania, down from more than 600,000 on Tuesday night.

Amtrak and most local commuter railroads in the New York metropolitan area said their services were back to normal on Wednesday. Some schools canceled classes or delayed their openings.

The line of strong thunderstorms with wind gusts of 50 to 80 miles per hour (80 to 129 kilometers per hour) sped eastward across the region Tuesday evening, causing local flooding, scattering debris and dropping hail as large as tennis balls.

Local news showed footage of trees resting on top of crushed cars and houses, and vehicles submerged in water.

There were more than 100 reports of hail in states including Ohio, Pennsylvania, New York and Connecticut, the National Weather Service said.

New York Governor Andrew Cuomo declared a state of emergency in several counties in southeast New York and deployed members of the New York National Guard to assist with the recovery.

Officials in Brookfield, Connecticut, declared a town disaster and told residents to stay inside until they could assess the damage.

“Please be aware that there are hundreds of downed trees, utility poles and electrical lines. AVOID all down trees and utility poles as they may still involve LIVE power lines,” the Brookfield Police Department said on Facebook.

(Reporting by Peter Szekely in New York and Brendan O’Brien in Milwaukee; Editing by Alison Williams and Susan Thomas)