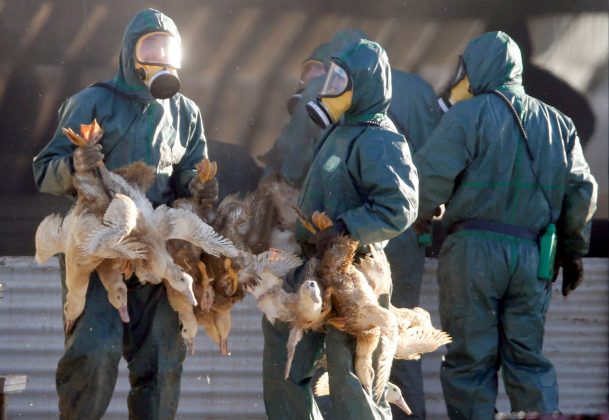 LONDON (Reuters) – The global spread of bird flu and the number of viral strains currently circulating and causing infections have reached unprecedented levels, raising the risk of a potential human outbreak, according to disease experts.

Multiple outbreaks have been reported in poultry farms and wild flocks across Europe, Africa and Asia in the past three months. While most involve strains that are currently low risk for human health, the sheer number of different types, and their presence in so many parts of the world at the same time, increases the risk of viruses mixing and mutating – and possibly jumping to people.

“This is a fundamental change in the natural history of influenza viruses,” Michael Osterholm, an infectious disease specialist at University of Minnesota, said of the proliferation of bird flu in terms of geography and strains – a situation he described as “unprecedented”.

Global health officials are worried another strain could make a jump into humans, like H5N1 did in the late 1990s. It has since caused hundreds of human infections and deaths, but has not acquired the ability to transmit easily from person to person.

The greatest fear is that a deadly strain of avian flu could then mutate into a pandemic form that can be passed easily between people – something that has not yet been seen.

While avian flu has been a prominent public health issue since the 1990s, ongoing outbreaks have never been so widely spread around the world – something infectious disease experts put down to greater resilience of strains currently circulating, rather than improved detection or reporting.

While there would normally be around two or three bird flu strains recorded in birds at any one time, now there are at least half a dozen, including H5N1, H5N2, H5N8 and H7N8.

The Organization for Animal Health (OIE) says the concurrent outbreaks in birds in recent months are “a global public health concern”, and the World Health Organization’s director-general warned this week the world “cannot afford to miss the early signals” of a possible human flu pandemic.

The precise reasons for the unusually large number and sustained nature of bird outbreaks in recent months, and the proliferation of strains, is unclear – although such developments compound the global spreading process.

Bird flu is usually spread through flocks through direct contact with an infected bird. But Osterholm said wild birds could be “shedding” more of the virus in droppings and other secretions, increasing infection risks. He added that there now appears to be “aerosol transmission from one infected barn to others, in some cases many miles away”.

Ian MacKay, a virologist at Australia’s University of Queensland, said the current proliferation of strains means that “by definition, there is an increased risk” to humans.

“You’ve got more exposures, to more farmers, more often, and in greater numbers, in more parts of the world – so there has to be an increased risk of spillover human cases,” he told Reuters.

Nearly 40 countries have reported new outbreaks of highly pathogenic avian influenza in poultry or wild birds since November, according to the WHO.

In China, H7N9 strains of bird flu have been infecting both birds and people, with the of human cases rising in recent weeks due to the peak of the flu season there. According to the WHO, more than 900 people have been infected with H7N9 bird flu since it emerged in early 2013.

In birds, latest data from the OIE should that outbreaks of highly pathogenic avian flu have been detected in Britain, Italy, Kuwait and Bangladesh in the last few days alone.

Russia’s agriculture watchdog issued a statement describing the situation as “extremely tense” as it reported H5N8 flu outbreaks in another four regions. Hungarian farmers have had to cull 3 million birds, mostly geese and ducks.

These come on top of epidemics across Europe and Asia which have been ongoing since late last year, leading to mass culling of poultry in many countries.

Strains currently documented as circulating in birds include H5N8 in many parts of Europe as well as in Kuwait, Egypt and elsewhere, and H5N1 in Bangladesh and India.

In Africa – which experts say is especially vulnerable to missing flu outbreak warning signs due to limited local government capacities and weak animal and human health services – H5N1 outbreaks have been reported in birds in Burkina Faso, Cameroon, Ghana, Niger, Nigeria and Togo. H5N8 has been detected in Tunisia and Egypt, and H7N1 in Algeria.

The United States has, so far this year, largely escaped bird flu, but is on high alert after outbreaks of H5N2, a highly pathogenic bird flu, hit farms in 15 states in 2015 and led to the culling of more than 43 million poultry.

David Nabarro, a former senior WHO official who has also served as U.N. system senior coordinator for avian and human influenza, says the situation is worrying. “For me the threat from avian influenza is the most serious (to public health), because you never know when,” he told Reuters in Geneva.

H5N1 is under close surveillance by health authorities around the world. It has long been seen as one to watch, feared by infectious disease experts because of its pandemic potential if it were to mutate an acquire human-to-human transmission capability.

A highly pathogenic virus, it jumped into humans in Hong Kong in 1997 and then re-emerged in 2003/2004, spreading from Asia to Europe and Africa. It has caused hundreds of infections and deaths in people and prompted the culling of hundreds of millions of poultry.

Osterholm noted that some currently circulating H5 strains – including distant relatives of H5N1 – are showing significant capabilities for sustaining their spread between wild flocks and poultry, from region to region and farm to farm.

Wherever wild birds are found to be infected, they say, and wherever there are farms or smallholdings with affected poultry or aquatic bird flocks, regular, repeated and consistent testing of everyone and anyone who comes into contact is vital.

“Influenza is a very tough beast because it changes all the time, so the ones we’re tracking may not include one that suddenly emerges and takes hold,” said MacKay.

“Right now, it’s hard to say whether we’re doing enough (to keep on top of the threat). I guess that while it isn’t taking off, we seem to be doing enough.”