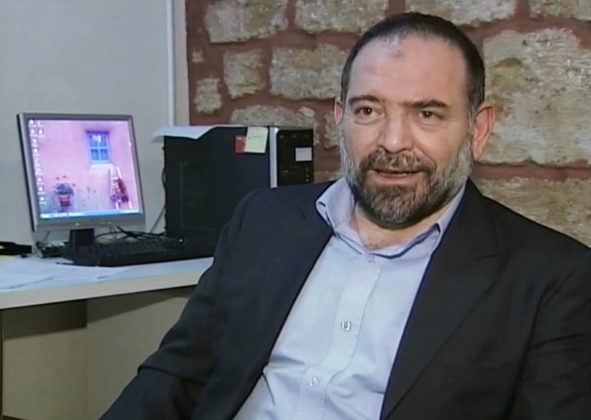 Lokman Slim, an activist and publisher who ran a research centre, speaks during an interview, in a still image taken from Reuters TV footage shot on February 2, 2009, in Beirut, Lebanon. Reuters TV/via REUTERS

By Ellen Francis and Laila Bassam

BEIRUT (Reuters) – A prominent Lebanese Shi’ite publisher who criticized the armed Hezbollah movement was shot dead in a car in southern Lebanon on Thursday, the first such killing of a high-profile activist in years.

A judge following the case said the body of Lokman Slim had four bullets in the head and one in the back. A security source said his phone was found on the side of a road.

They said the motive remained unclear.

Slim, who was in his late 50s, ran a research center, made documentaries with his wife and led efforts to build an archive on Lebanon’s 1975-1990 sectarian civil war.

He spoke against what he described as the Iranian-backed, Shi’ite Muslim Hezbollah’s intimidation tactics and attempts to monopolies Lebanese politics.

His sister suggested Slim was murdered because of this. He was last seen after visiting a poet friend. His wife said he went missing overnight and did not answer his phone.

Hezbollah did not respond to a request for comment on his death, which the French ambassador and Lebanese officials, including the president, called “an assassination.”

Amnesty International, a top U.N. diplomat in Lebanon and the EU ambassador to the country, Ralph Tarraf, all demanded an investigation. “We deplore the prevailing culture of impunity,” Tarraf wrote in a tweet.

A Lebanese press freedom center, SKeyes, said it feared a cover-up of the crime and more attempts to eliminate “symbols of free political thought.”

The center was founded after a car bomb killed journalist Samir Kassir in 2005, at a time when a series of assassinations hit Lebanon targeting critics of Syria’s 15-year domination.

At Slim’s family home in Beirut’s southern suburbs, where Hezbollah holds sway, family members sat in shock. Some wept in silence. A relative said they found out about his death from a news alert while at a police station.

“What a big loss. And they lost a noble enemy too … It’s rare for someone to argue with them and live among them with respect,” his sister Rasha told reporters, without naming Hezbollah.

She said he had not mentioned any threats. “Killing is the only language they are fluent in,” she added. “I don’t know how we will go on with our work … It will be hard.”

In an interview last month on Saudi’s al-Hadath TV, Slim said he believed Damascus and its ally Hezbollah had a role in the port blast that ripped through Beirut in August, killing 200 people and injuring thousands.

Hezbollah has denied any links to the explosion.

President Michel Aoun, a political ally of Hezbollah, said he had ordered an investigation into the crime.

Slim’s criticism of Hezbollah faced rebuke from its supporters, who called him “an embassy Shi’ite,” accusing him of being a tool of the United States.

Washington, which classifies Hezbollah as terrorists, has ramped up sanctions against it to pressure Tehran.

Slim founded a nonprofit to promote civil liberties which received a grant under the U.S. Middle East Partnership Initiative and worked with an American think tank, leaked WikiLeaks diplomatic cables said in 2008.

In late 2019, Slim said people had gathered in his garden, chanting slurs and threats. His statement held Hezbollah’s leader responsible.

At the time, Slim also said he had received death threats after speaking in a debate at a Beirut camp that activists set up when protests against all the country’s political leaders swept Lebanon.

“His murder is a very big loss for Lebanon, for culture,” said Hazem Saghieh, a well-known Lebanese journalist. “He was one of a few who only knew how to speak his mind.”