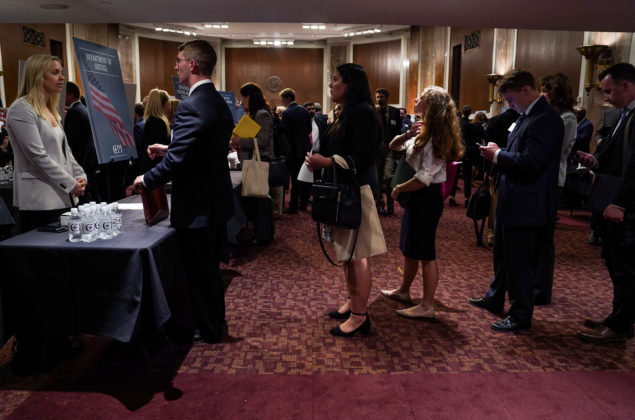 Despite the signs that layoffs are abating, the weekly jobless claims report from the Labor Department on Thursday showed at least 17.8 million Americans were on benefits in mid-January, indicating that long-term unemployment was likely becoming entrenched. That could boost President Joe Biden’s push for the U.S. Congress to pass his $1.9 trillion recovery plan.

“It’s too early to predict that this begins a strong reversal of excruciatingly high layoffs,” said Robert Frick, corporate economist at Navy Federal Credit Union in Vienna, Virginia. “Another round of stimulus is important.”

Initial claims for state unemployment benefits fell 33,000 to a seasonally adjusted 779,000 for the week ended Jan. 30. That was the third straight weekly decline. Economists polled by Reuters had forecast 830,000 applications for the latest week.

Unadjusted claims decreased 23,525 to 816,247 last week. Including a government-funded program for the self-employed, gig workers and others who do not qualify for the regular state unemployment programs, 1.165 million people filed claims last week, down from 1.243 million in the prior period.

Claims remain above their 665,000 peak during the 2007-2009 Great Recession, but well below the record 6.867 million last March when the pandemic hit the United States.

Part of the elevation in claims reflects people re-applying for benefits after the government in late December renewed a $300 unemployment supplement until March 14 as part of a pandemic relief package worth nearly $900 billion.

“The decline in new claims in recent weeks adds to the evidence that the worst months for the labor market could very well be behind us,” said Sarah House, a senior economist at Wells Fargo Securities in Charlotte, North Carolina.

Stocks on Wall Street were trading higher. The dollar rose against a basket of currencies. U.S. Treasury prices were mostly lower.

Though January was the worst month since the onset of the pandemic, the decline in economic activity leveled off in the second half of the month amid signs of a peak in the recent coronavirus wave.

Data from Homebase, a payroll scheduling and tracking company, showed its measure of employees at work flattened out over the last two weeks of January, pausing the decline observed from December into January.

The claims report also showed the number of people receiving benefits after an initial week of aid dropped 193,000 to 4.592 million during the week ended Jan. 23. About 17.836 million people were on unemployment benefits on all programs in mid-January, down from 18.322 million in the first week of 2021.

Last week’s claims data has no bearing on Friday’s closely watched employment report for January, as it falls outside the survey period, which was in the middle of the month. Still, the signs of stability in other labor market measures support expectations that hiring rebounded in January after the economy shed jobs in December for the first time in eight months.

According to a Reuters poll of economists payrolls likely increased by 50,000 jobs in January after declining by 140,000 in December. In the wake of the fairly upbeat reports, Goldman Sachs lifted its payrolls forecast by 75,000 to 200,000.

The economy has recouped 12.5 million of the 22.2 million jobs lost in March and April. The Congressional Budget Office estimated on Monday that employment would not return to its pre-pandemic level before 2024.

Economists were unperturbed by a separate report on Thursday from the Labor Department showing worker productivity dropped at a 4.8% annualized rate in the fourth quarter. That was the deepest pace of decline since the second quarter of 1981 and followed a 5.1% pace of expansion in the third quarter. The pandemic has caused wild swings in productivity.

“This decline came after very strong productivity growth in the middle quarters of the year, and we think that the pandemic has led to a shift in economic activity away from some low-productivity sectors that has led to firming in productivity growth through some of the noise in the quarterly readings,” said Daniel Silver, an economist at JPMorgan in New York.