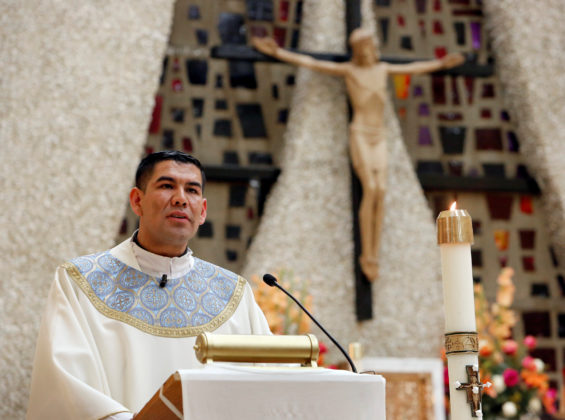 (Reuters) – Reverend Manuel Dorantes closed his eyes, took a breath to calm his fear and prayed when word came that Cardinal Blase Joseph Cupich had put out a call for volunteers.

Cupich, archbishop of the Roman Catholic Archdiocese of Chicago, needed two dozen young priests to take on the sacred duty of administering the last rites to those dying from the new and highly contagious coronavirus.

For the priests, like doctors, nurses and other frontline workers, it means putting their lives at risk to care for the sick in hospitals.

Throughout history, priests and other clergy have risked their lives ministering to the dying through population-decimating plagues and on the battlefields of wars.

But in the face of COVID-19, which has killed more than 150,000 people worldwide and about 33,000 in the United States, the Vatican last month waived the requirement for in-person worship and sacraments, including a special dispensation for believers who cannot receive the last rites.

Many faiths and denominations in America have taken similar unprecedented actions, as the coronavirus has upended one of the most sacred duties of clergy of most major faiths – ministering to the dying and comforting the bereaved.

The disease has forced clergy to rely on technology. Cell phones or iPads are held at the bedsides of very ill patients by nurses and orderlies.

During funerals, they preach to empty pews during services shared using sites such as Zoom and FaceTime. Graveside prayers can be attended by the barest few, sometimes just three mourners.

For clergy, this is the new normal, said United Methodist Bishop Thomas Bickerton, a member of the denomination’s ruling council of bishops, which has halted in-person worship services.

“We don’t even bother to ask,” said Kirshner, 46, who leads a conservative congregation of about 800 families. “It’s too dangerous.”

But the rabbi asks nurses or orderlies to hold an iPad so patients can see it. They then pray together. “It’s very, very important that we at least offer that.”

Some burials that under Jewish tradition should be held within a day have to wait a week or more, the rabbi said, in places where cemeteries and funeral homes are beyond capacity.

One Muslim imam said many funeral homes in the United States are no longer allowing the Islamic ritual of washing the body before burial, for fear of spreading the disease.

“For the family it’s tough because they cannot mourn the same,” Daoud Nassimi, an imam in Washington D.C., told the online publication Middle East Eye.

About 3 million Americans identify as members of the Episcopalian Church, which is largely relying on video chats and phone calls by priests to make that last connection with those on the brink of death, according to Reverend Lorenzo Librija of the Episcopal Diocese of Los Angeles.

A few weeks ago, he came up with a plan to organize the effort. It is called “Dial-a-Priest” and is aimed at helping people who do not have a relationship with a local church, but still want to receive the last rites.

“We picked that name because it’s easy to remember and easy to Google,” said Librija.

His group has about 100 retired ministers who have volunteered to man telephones around the clock, ready to give the ritual ministration of death from the Book of Common Prayer.

The Archdiocese of Chicago, with its 24-member last rites team, is one of the few places in the nation where in-person visits to patients near death have continued in hospitals.

Dorantes, pastor of Chicago’s Saint Mary of the Lake parish, said he has conducted several bedside rituals since he volunteered in late March.

He and the other priests don protective jump suits and N95 respirator masks. Wearing gloves, they take a dab of blessed oil and make the sign of the cross on the patient’s forehead and hands using a Q-tip.

“Laying on of hands and anointing, this is the sacrament of the church, a visible sign of invisible grace,” he said. “I could see it in their eyes, incredible moments of grace.”

(Reporting by Rich McKay in Atlanta; Editing by Daniel Wallis)