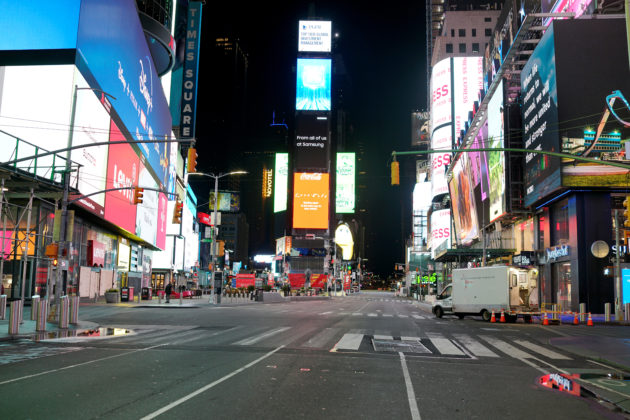 By Joseph Ax and Doina Chiacu

NEW YORK/WASHINGTON (Reuters) – The U.S. debate intensified on Monday over when to lift restrictions to control the coronavirus outbreak, with protesters gathering in state capitals to demand an end to lockdowns and officials urging caution until more testing becomes available.

Stay-at-home measures, which experts say are essential to slow the spread of the virus, have ground the economy to a virtual standstill and forced more than 22 million people to apply for unemployment benefits in the past month.

Demonstrations have flared in recent days across the country to demand an end to the lockdowns, with more planned on Monday. Thousands gathered outside the capitol building in Lansing, Michigan, last week to protest against Democratic Governor Gretchen Whitmer.

Tim Walters, who was part of a “Reopen Maryland” protest over the weekend in which hundreds of people drove through the state capital Annapolis, said concerns about the virus must be kept in perspective and weighed against the economic toll of lockdowns.

“There is a lot of frustration about who decides what is essential. And people are hurting,” said Walters, a management consultant for a group he estimated had 20,000 members on Facebook. Walters’ group is not associated with another protest planned in Annapolis on Monday.

In Pennsylvania, where Democratic Governor Tom Wolf has promised to veto a Republican-backed bill that would force him to reopen some businesses, a large protest was expected in the state capital Harrisburg.

“Anyone who has been impacted by this shutdown in a negative way is welcome and we want them to be heard regardless of their party affiliation,” said Stephen LaSpina, an organizer of the protest. He added that protesters would be encouraged to stay in their cars and maintain social distancing.

President Donald Trump, a Republican seeking re-election in November, has said state governors should have the final say but has favored an early end to the lockdowns, and many protesters in the past week have sported pro-Trump signs and campaign gear.

Republican lawmakers in several states have also backed the protests.

Joe Buchert, 48, a retired police officer who lives in Pottstown, Pennsylvania, attended the Harrisburg protest because he thinks the governor has overreached.

“The Democratic governors are just trying to kill the economy to hurt Trump,” said Buchert, who was wearing a red Trump 2020 hat.

In Washington, lawmakers in Congress were near an agreement for extra money to help small businesses hurt by the pandemic, a top Republican lawmaker said. The Trump administration sought to add $250 billion to a small-business loan program established last month as part of a $2.3 trillion coronavirus economic relief plan. That fund already has been exhausted.

Click for a GRAPHIC tracking the novel coronavirus in the U.S.

Health experts and lawmakers on the front lines of the battle to curb the pandemic have warned that the country could face a second and even deadlier wave of infections if the lockdowns end prematurely.

The United States has by far the world’s largest number of confirmed coronavirus cases, with more than 753,000 infections and over 40,500 deaths, nearly half of them in the state of New York, according to a Reuters tally.

New York Mayor Bill de Blasio said on Monday it could take weeks if not months before the country’s most populous city reopens due to a lack of widespread testing, even as officials elsewhere began rolling back restrictions on daily life.

De Blasio, whose city is at the U.S. epicenter of the coronavirus crisis, said New York needed to be conducting hundreds of thousands of tests a day and to see hospitalizations decline further before reopening the economy.

“The federal government is not stepping up … I think I might be the first person in history to ask Donald Trump to speak up,” De Blasio told a news conference. Earlier, the mayor told MSNBC the virus could boomerang if testing capacity was not ramped up.

De Blasio’s warning on testing echoed comments by several governors over the weekend disputing Trump’s assertions that there were enough tests for COVID-19, the respiratory disease caused by the novel coronavirus.

Residents in Florida were allowed to return to some beaches after Governor Ron DeSantis approved the relaxing of some restrictions.

Charlie Latham, mayor of Jacksonville Beach, said the beach there was reopened with limited hours, and it went well with no arrests for people violating social distancing rules which barred chairs and blankets.

“We thought that the public was ready to maintain the social distancing standards and to exercise good judgment. And it’s paid off, it’s paid off really well,” Latham told Fox News.