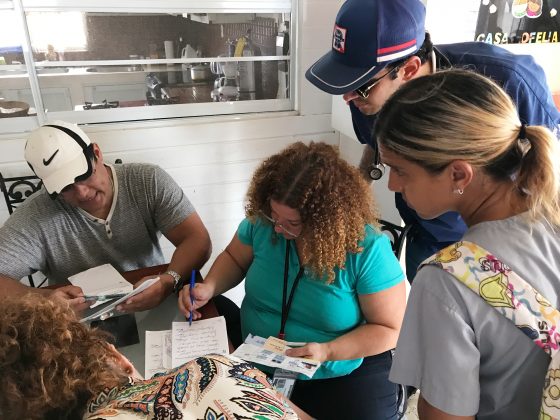 OROCOVIS, Puerto Rico (Reuters) – At a community center in Orocovis, an isolated agricultural town of 23,000 in the mountains of central Puerto Rico, six oxygen-dependent patients drew breath with the help of the diesel generator powering their equipment.

Then the generator sputtered as if it might die.

A dozen volunteer doctors and medical students from San Juan started assessing which patient should be transported first – in the town’s only ambulance – to a hospital an hour away, and which could survive without oxygen for a short time.

Javier Sevilla Rodriguez, a medical student, had only one way to make the agonizing decisions. He removed one woman’s oxygen tube, watching carefully to see how her blood-oxygen level responded.

“This is how we are doing triage right now,” he said.

Two weeks after hurricane Maria, many of Puerto Rico’s sick, frail and elderly are teetering on the edge, one faulty generator away from missing dialysis treatments or having critical medications go bad.

With nearly the entire island still lacking electricity, hospitals, clinics, and shelters are operating on aging generators not intended for long-term use and powered by scarce diesel fuel. Water is still not available for nearly half the population and supplies of medicines and oxygen are running low.

And residents still can’t call for help across vast swaths of the island because of widespread cellular network outages.

Many regions in the interior of the island, like this one, are only now seeing relief efforts, amid a plodding U.S. disaster response to this island of 3.4 million American citizens. The U.S. territory’s battered economy and infrastructure has magnified the humanitarian crisis wrought by the strongest hurricane to hit here in nine decades.

In Orocovis, even the sickest patients have gone largely without medical care since the storm. So the doctors worked quickly throughout the day, conferring with caregivers and writing prescriptions they would take back to San Juan to fill and then dispatch by messenger.

Now at the community center, their last stop before leaving town, time ran out.

With a loud clunk, the sounds of humming oxygen machines stopped and were replaced by a chorus of beeps and chirps warning that power had been cut.

The generator had failed.

A CALL FOR DOCTORS

The medical convoy that visited Orocovis is an entirely volunteer operation, organized by physician Carlos Mellado. After Maria hit Puerto Rico on September 20, blocking roads and crippling power and communications networks, Mellado asked other doctors at his clinic to cover for him and threw himself into hurricane relief work.

On the first day, he headed to Canovanas, east of the capital, checking on people at shelters. He promised to fill many patients’ prescriptions and send back the medications.

The next day, he went to Vieques, an island off Puerto Rico’s eastern coast, and found diabetics without insulin, heart patients under extreme stress and crucial treatments interrupted by power outages.

When Mellado returned to San Juan, he stopped by the local radio station, which in the days after the storm, had become a trusted source of information for Puerto Ricans living without communications. Invited to speak to listeners, he called for other physicians willing to join him.

Now, Mellado has a core group of 18 physicians, who rotate between the trips and their own practices, and a growing list of more doctors who want to join. Each morning, he takes out a paper map of the island covered with notes about where he’s been. The doctors pick a town and go.

The convoys have no official ties, but Mellado reports each evening on what the doctors found to Puerto Rican and federal officials in San Juan. Sometimes Puerto Rico’s housing department coordinates deliveries of the drugs back to the towns, and a pharmacy chain donates medications for patients without insurance.

The government’s death count from the storm more than doubled this week to 36. But doctors across the island believe the total would be far higher if it included people with chronic conditions who died because they lacked access to medical care.

“For these critically ill patients, if everything fails, they don’t have too much time,” said Humberto Guzman, a pediatric orthopedic surgeon and member of the medical convoy. “People are dying.”

In Orocovis, after the generator failed, the doctors looked for a quick fix. Guzman ran up the street to the town’s shuttered urgent care facility.

There, he found a half-dozen oxygen tanks that locals said had been delivered the day before. Each could provide about a day’s worth of oxygen to a patient.

The tanks were quickly moved to the community center, where the doctors taught family members to use them. But before that became necessary, the generator sprang back to life.

The doctors packed up to leave, assuring patients’ families that they could switch to the tanks if the generator failed again.

“In every town right now, there are moments like this happening,” Guzman said. “That’s why you need people like us to just go. We cannot wait.”