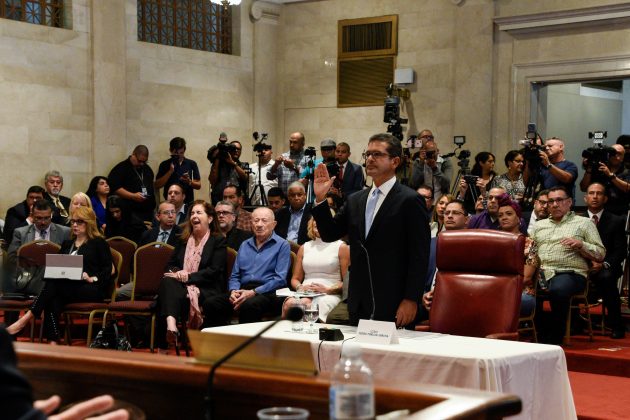 Pedro Pierluisi gives a statement to attend his nomination as Secretary of State during a public hearing of the Commission of Government of the House of Representatives called upon by the President of the House, Johnny Mendez, hours before Ricardo Rossello steps down as Governor of Puerto Rico, in San Juan, Puerto Rico August 2, 2019. REUTERS/Gabriella N. Baez

SAN JUAN (Reuters) – Hours before Puerto Rico Governor Ricardo Rosselló is due to resign on Friday after 12 days of street protests, the 3.2 million residents of the bankrupt U.S. territory remained unclear about who would succeed him.

The revelation of vulgar text messages between the first-term governor and his associates brought thousands into the streets to protest. Anger had been building for years over a series of crises including the island’s bankruptcy filing, ineffective recovery efforts after a 2017 hurricane killed more than 3,000 people and a corruption investigation.

Rosselló is due to resign at 5 p.m. ET (2100 GMT). Protesters and leaders of the ruling party who seek to retain power in the 2020 elections have all rejected his chosen successor: a lawyer who worked for the unpopular fiscal control board, Pedro Pierluisi.

“I’m not for sale,” Senate President Thomas Rivera Schatz, of Rosselló’s New Progressive Party (PNP), said on Twitter Friday, rejecting the choice. “I’m not scared of them. I’m not intimidated by their media blackmail, nor their attempts at demonization. My principles are not negotiable.”

Rosselló nominated Pierluisi as secretary of state, which would put him next in line to succeed the governor. The appointment requires approval by the legislature.

Protesters have already vowed to topple the next in line for the job, Justice Secretary Wanda Vázquez, owing to her position in an administration dogged by corruption scandals.

Federal officials and investors are keenly watching political transition of the territory. Puerto Rico has $42.5 billion in federal disaster funding allocated to it, and its bankruptcy the biggest ever in the U.S. municipal bond market.

On Thursday, the PNP-controlled Senate delayed a hearing on Pierluisi’s nomination until Monday. That left the island’s House of Representatives to decide his fate on Friday.

If the House votes against the 60-year-old attorney, as expected, Vázquez would become governor, House speaker Carlos Méndez said.

There was also the possibility Rosselló could nominate a last-minute alternative candidate for secretary of state. Schatz has been rumored to want the job, but on Thursday said he had neither asked for the post nor been offered it.

There was talk Rosselló might postpone his resignation until the succession process was resolved.

“Vázquez’s rejection is clear among the majority of people speaking up everywhere,” Vidot said. “We have to act faster.”