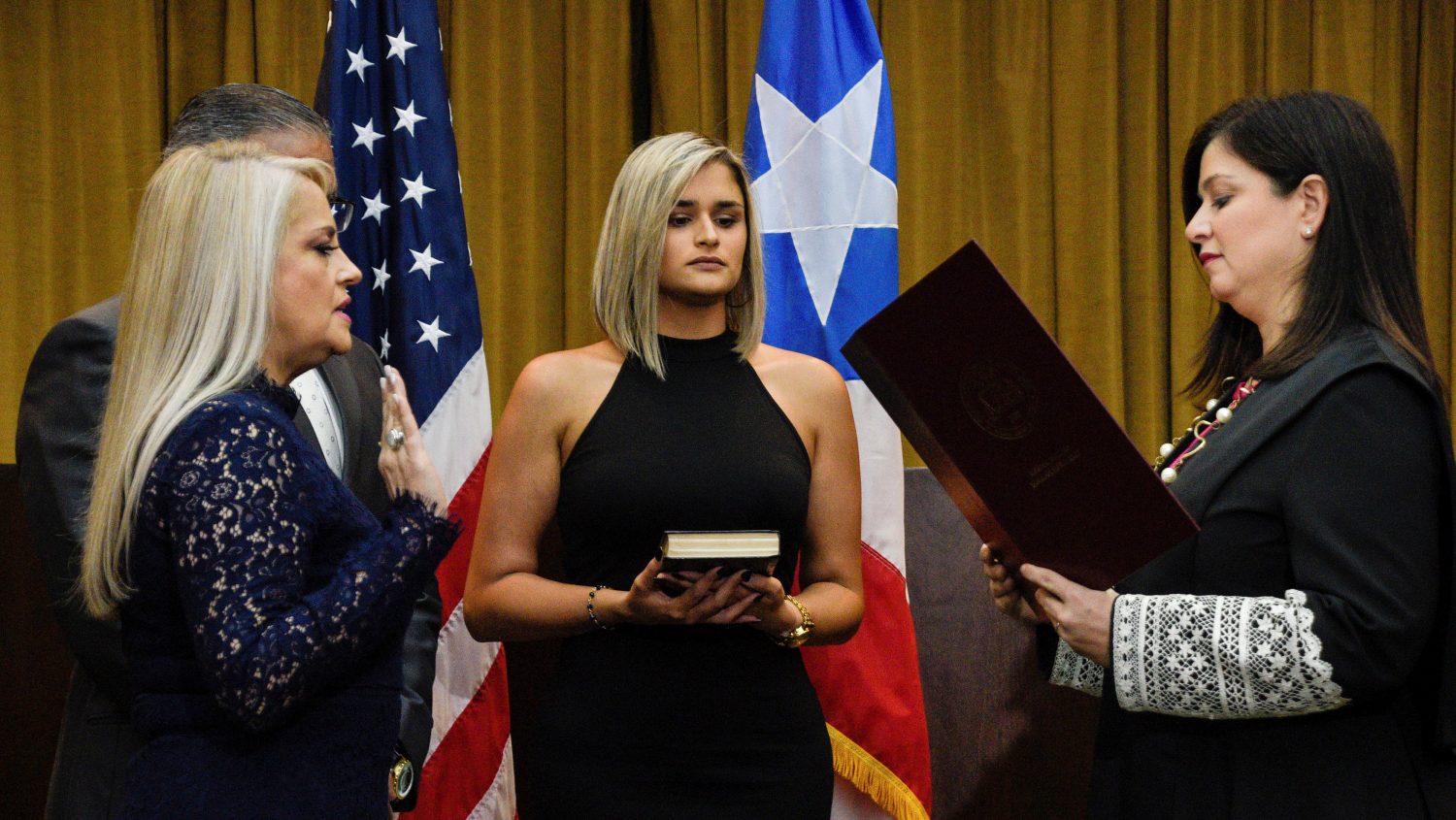 SAN JUAN (Reuters) – The revolving door at the governor’s office in Puerto Rico may finally stop with Wanda Vazquez, the newly sworn-in chief executive of the bankrupt U.S. territory, who said on Thursday she has no plans to resign.

In a series of interviews with local media, Puerto Rico’s former justice secretary denied reports that she had agreed to resign soon to allow Jenniffer Gonzalez, the Caribbean island’s nonvoting representative in the U.S. Congress, to take over.

“I have never had such an agreement. I don’t know what kind of agreements (New Progressive Party and legislative leaders) have reached,” Vazquez said on a morning radio show, emphasizing that she intends to remain in office for the remainder of former Governor Ricardo Rossello’s term, which ends on Jan. 1, 2021.

On Wednesday, Vazquez became Puerto Rico’s third governor in less than a week, after Rossello, who took office in 2017, stepped down on Friday, and his hand-picked successor, Pedro Pierluisi, was removed by the island’s supreme court.

The nine-member court on Wednesday unanimously ruled that Pierluisi’s assumption of the office was unconstitutional because the Puerto Rico Senate had not confirmed his July 31 appointment by Rossello as secretary of state, the post that is next in line for governor under the territory’s constitution.

The high court’s ruling followed weeks of political turmoil, with Rossello on July 24 announcing his intention to resign after of days of protests.

The demonstrations, which drew around a third of the island’s 3.2 million people, were sparked by the revelation of offensive chat messages between Rossello and his closest allies, and federal corruption charges brought against two former members of his administration.

The chat message scandal led to the July 13 resignation of Secretary of State Luis Rivera Marin, whom Rossello eventually replaced with Pierluisi.

Vazquez last week initially voiced reluctance to take over the island’s top government post after being targeted by protesters for alleged corruption and being too close to Rossello.

On Thursday, Vazquez said she did not see herself as a politician, emphasizing she would not run for governor in the 2020 election.

The political upheaval comes at a critical time in Puerto Rico’s bankruptcy, as it seeks billions of dollars in federal funding for healthcare and recovery efforts from devastating 2017 hurricanes.

As governor, Vazquez must deal with Puerto Rico’s federally created fiscal oversight board, which filed the government’s bankruptcy in 2017 in U.S. District Court to restructure about $120 billion of debt and pension obligations.

“The board is there and we must seek consensus,” Vazquez said in an interview, adding that the majority of Puerto Ricans oppose the board. 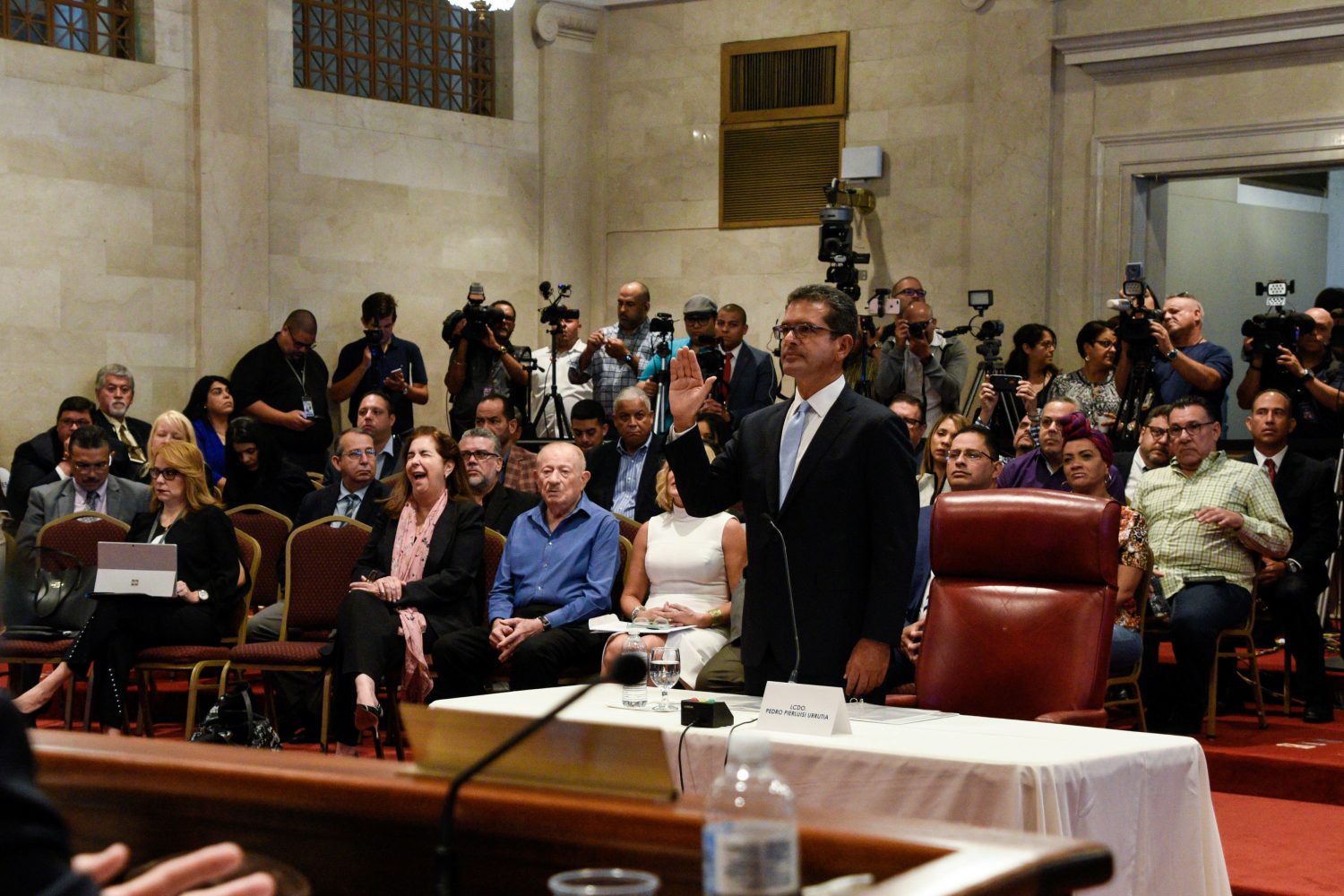 SAN JUAN (Reuters) – Hours before Puerto Rico Governor Ricardo Rosselló is due to resign on Friday after 12 days of street protests, the 3.2 million residents of the bankrupt U.S. territory remained unclear about who would succeed him.

The revelation of vulgar text messages between the first-term governor and his associates brought thousands into the streets to protest. Anger had been building for years over a series of crises including the island’s bankruptcy filing, ineffective recovery efforts after a 2017 hurricane killed more than 3,000 people and a corruption investigation.

Rosselló is due to resign at 5 p.m. ET (2100 GMT). Protesters and leaders of the ruling party who seek to retain power in the 2020 elections have all rejected his chosen successor: a lawyer who worked for the unpopular fiscal control board, Pedro Pierluisi.

“I’m not for sale,” Senate President Thomas Rivera Schatz, of Rosselló’s New Progressive Party (PNP), said on Twitter Friday, rejecting the choice. “I’m not scared of them. I’m not intimidated by their media blackmail, nor their attempts at demonization. My principles are not negotiable.”

Rosselló nominated Pierluisi as secretary of state, which would put him next in line to succeed the governor. The appointment requires approval by the legislature.

Protesters have already vowed to topple the next in line for the job, Justice Secretary Wanda Vázquez, owing to her position in an administration dogged by corruption scandals.

Federal officials and investors are keenly watching political transition of the territory. Puerto Rico has $42.5 billion in federal disaster funding allocated to it, and its bankruptcy the biggest ever in the U.S. municipal bond market.

On Thursday, the PNP-controlled Senate delayed a hearing on Pierluisi’s nomination until Monday. That left the island’s House of Representatives to decide his fate on Friday.

If the House votes against the 60-year-old attorney, as expected, Vázquez would become governor, House speaker Carlos Méndez said.

There was also the possibility Rosselló could nominate a last-minute alternative candidate for secretary of state. Schatz has been rumored to want the job, but on Thursday said he had neither asked for the post nor been offered it.

There was talk Rosselló might postpone his resignation until the succession process was resolved.

“Vázquez’s rejection is clear among the majority of people speaking up everywhere,” Vidot said. “We have to act faster.” 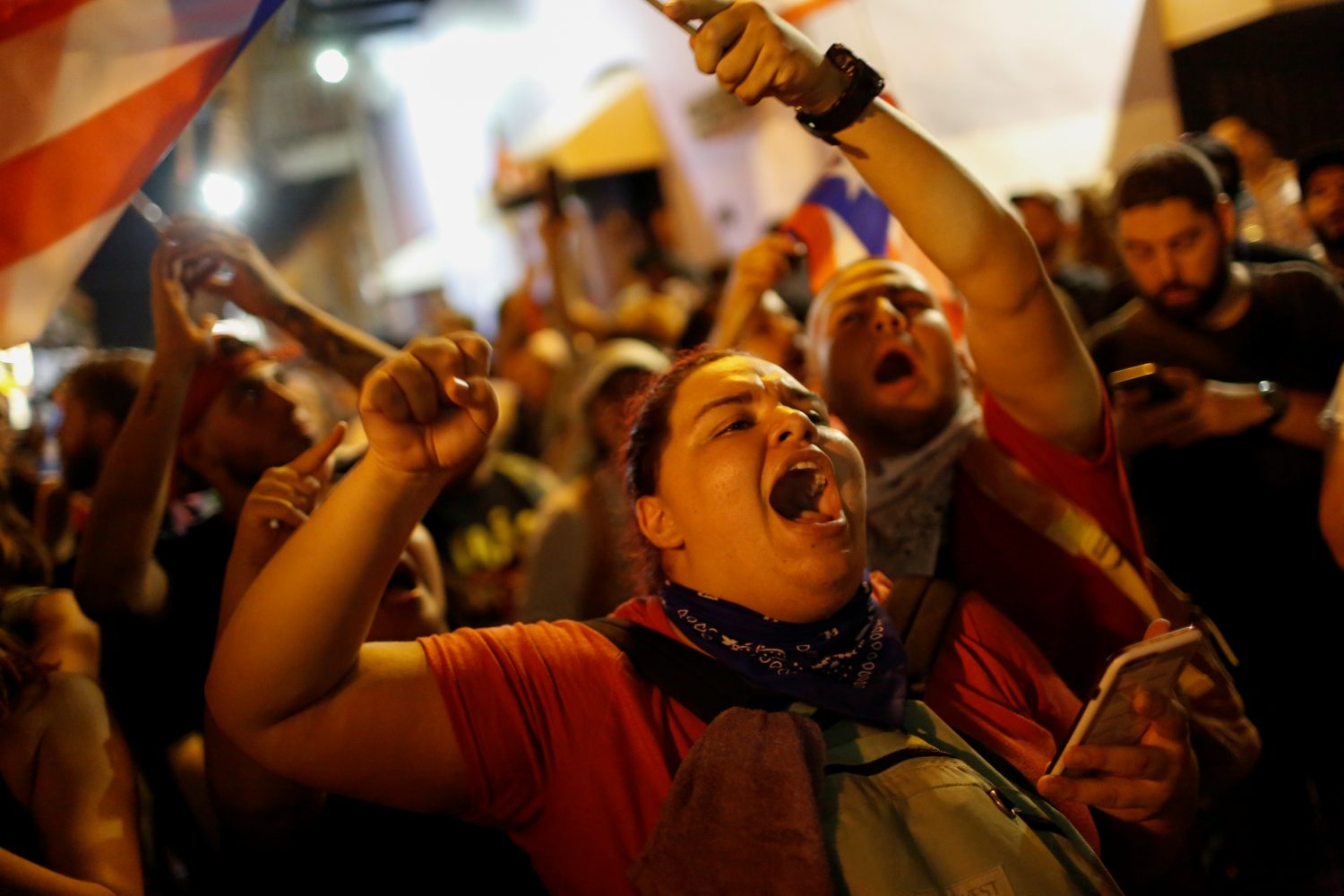 SAN JUAN (Reuters) – Puerto Rico Governor Ricardo Rossello was weighing his political future on Wednesday after almost two weeks of protests demanding his resignation over the publication of offensive chat messages and a corruption scandal, his spokesman said.

Rossello, a first-term governor in his first elected office, has resisted calls to step down over a scandal local media have dubbed “Rickyleaks.” Media, including El Nuevo Dacuta newspaper, cited unnamed sources as saying his resignation was imminent.

“He stated yesterday he is in a process of reflection, and listening to the people,” the governor’s spokesman Anthony Maceira said in a text message to Reuters. “Whichever decision he makes will, as always, be communicated officially.”

Protesters had cheered the reports of a possible resignation late on Tuesday but warned that Rossello’s departure would not end the demonstrations that were now entering their 12th day.

The island of 3.2 million people has been rocked by multiple crises in recent years, including a bankruptcy filing and a devastating hurricane in 2017 that killed about 3,000 people.

If Rossello steps down, his replacement as the U.S. territory’s leader would likely be Justice Secretary Wanda Vazquez, whom many protesters reject because of her ties to the 40-year-old governor.

A string of Rossello’s closest aides have stepped down as prosecutors investigated the scandal. The governor’s chief of staff Ricardo Llerandi resigned on Tuesday, citing concerns for the safety of his family.

The protests in the capital San Juan were spurred by the publication on July 13 of chat messages on the messaging app Telegram, in which Rossello and aides used profane language to describe female politicians and gay Puerto Rican celebrities, including Ricky Martin.

The uncertainty over Rossello’s future has also complicated Puerto Rico’s bankruptcy process. The U.S. territory filed in 2017 to attempt to restructure about $120 billion of debt and pension obligations.

An attorney for the federally-created oversight board currently responsible for Puerto Rico’s finances told a court hearing on Wednesday that “current events” had played a role in delaying the filing of a plan to restructure the bulk of the territory’s debt.

The attorney, Martin Bienenstock, said at the hearing in San Juan that the board was also seeking more data and creditor support and expected to file the plan in the next few weeks.

The “Rickyleaks” scandal also has led to the resignation of the head of Puerto Rico’s fiscal agency, Christian Sobrino. His interim replacement, Jose Santiago Ramos, has also said he plans to step down next month, citing the current political environment.

Only Llerandi has so far said publicly he has handed in his phone.

Rossello has apologized several times for the chats and asked Puerto Ricans to give him another chance. He also has vowed not to seek re-election in 2020.

“The people are talking and I have to listen,” Rossello said in a statement on Tuesday.

But the island’s leading newspaper, as well as prominent U.S. Democratic officials and Republican President Donald Trump, have called on him to step down.

U.S. Representative Ra&uacute;l Grijalva, the chairman of the House of Representatives Natural Resources Committee, which plays a role in overseeing U.S. territories including Puerto Rico, said a Rossello resignation would be a step forward for the island.

“The people of Puerto Rico have shown the world what can happen when a united public demands justice and accountability with a clear voice,” Grijalva said in a statement. “Now they must choose what comes next, and Congress must listen.”