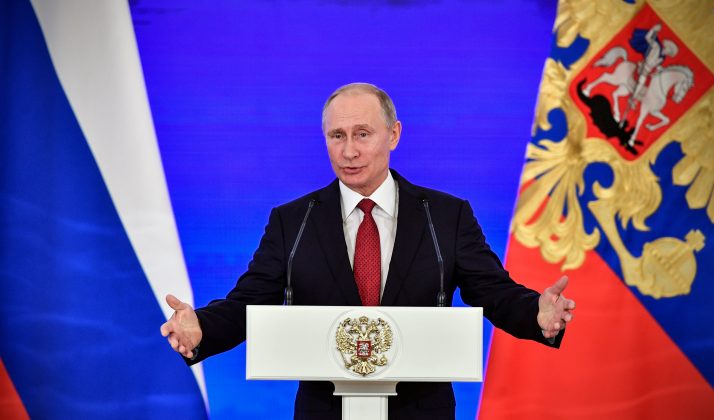 Russian President Vladimir Putin delivers a speech during a reception on the National Unity Day at the Kremlin in Moscow, Russia November 4, 2017. REUTERS/Alexander Nemenov/Pool

MOSCOW (Reuters) – Russian President Vladimir Putin suggested on Thursday that allegations of a state-sponsored doping program in Russia were an attempt to sow discontent ahead of the country’s presidential elections.

Reports commissioned by the World Anti-Doping Agency (WADA) have raised allegations of the existence of a state-run program that included tampering with Russian athletes’ positive tests by laboratory and security officials at the 2014 Sochi Games.

The International Olympic Committee (IOC) is now investigating the allegations and has banned six cross-country skiers for life from the Olympics over doping violations at Sochi.

“This is what is bothering me: the (Pyeongchang Winter) Olympics start in February, and when are our presidential elections? In March,” RIA Novosti state news agency quoted Putin as saying.

“There are big suspicions that all this is being done to create for someone the necessary conditions for discontent among sport lovers, athletes.”

Putin, widely expected to stand in and win the elections, also suggested the United States’ influence in international sports organizations could be having a deleterious effect on Russia.

Putin said the United States was home to “the main companies that order and pay for television rights, the main sponsors and advertisers” of major sporting events.

“In retaliation for our alleged meddling in their election, they (the United States) want to create problems in the election of the president of Russia,” Putin said.

Last month, Putin said the IOC was being pressured by the United States to prevent Russia taking part in the 2018 Pyeongchang Winter Olympics.

Russia escaped a blanket ban at the 2016 Olympics in Rio de Janeiro although it was, and remains, barred from competing in international athletics events.

The country’s Paralympic Committee and anti-doping agency RUSADA are also still suspended over the doping scandals.

Despite repeated calls for cooperation with international bodies to help rid Russia of doping, the authorities have always denied the state’s role in the scandal.

The IOC has said it will decide during its executive board meeting being held on Dec. 5-7 on the participation of Russian competitors at the 2018 winter games.