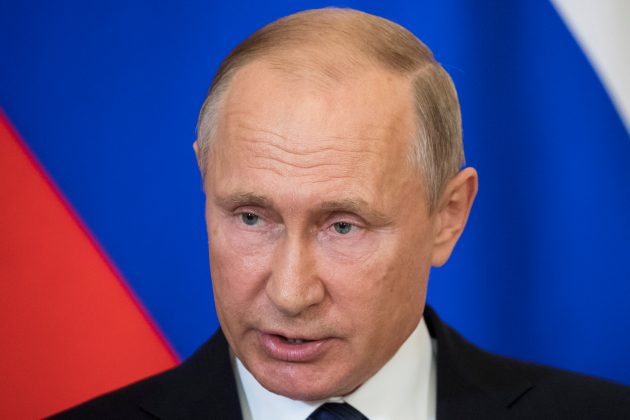 Russian President Vladimir Putin answers questions from journalists during a joint news conference with Bulgarian Prime Minister Boyko Borissov following their talks at the Kremlin in Moscow, Russia May 30, 2018. Pavel Golovkin/Pool via REUTERS

MOSCOW (Reuters) – Russian President Vladimir Putin on Monday signed into law counter-sanctions legislation that was drawn up by lawmakers in response to U.S. sanctions imposed on Russia in April.

The legislation gives the president, among other things, the power to sever ties with unfriendly countries, and to ban trade of goods with those countries.

However, it has been watered down since it was first conceived by lawmakers in response to the new round of U.S. sanctions on Russian businesses.

Lawmakers initially proposed large-scale restrictions on U.S. goods and services, ranging from food and alcohol to medicine and consulting services.

The law was one of two items of legislation. In the second, lawmakers debated making it a crime punishable by jail for a Russian citizen to comply with the U.S. sanctions.

Russian and foreign business lobbies had said any such law would effectively force firms to choose between doing business with Russia and having dealings with the rest of the world.

Last month Putin said any retaliation against western sanctions must not hurt the Russian economy or partners that do business in Russia.